Frisky and Flippant as Cole makes it all sound, there are limits. Take THIS Dude 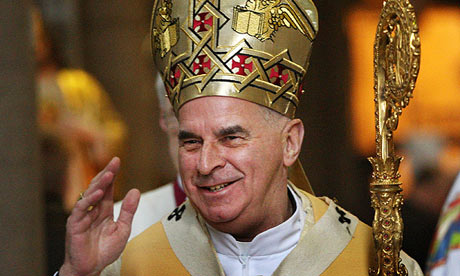 “In recent days certain allegations which have been made against me have
become public. Initially, their anonymous and non-specific nature led me
to contest them.

However, I wish to take this opportunity to admit that there have been
times that my sexual conduct has fallen below the standards expected of me
as a priest, archbishop and cardinal.

To those I have offended, I apologise and ask forgiveness.

To the Catholic Church and people of Scotland, I also apologise.

I will now spend the rest of my life in retirement. I will play no further
part in the public life of the Catholic Church in Scotland.”

LONDON — Britain’s most senior Roman Catholic cleric, Cardinal Keith O’Brien, has been accused of committing “inappropriate acts” in his relations with three priests and one former priest, the newspaper The Observer reported Sunday. The accusations, which date back to the 1980s, have been forwarded to the Vatican. The Observer article said that one of the four men involved in the complaints against the cardinal had later left the priesthood and married, unable to reconcile himself to the idea of spending a lifetime under Cardinal O’Brien’s authority. According to the newspaper, the man accused the cardinal of having made an “inappropriate approach” to him after night prayers when he was an 18-year-old seminarian in 1980, when Cardinal O’Brien, then a priest, was his spiritual director at a seminary in Melrose, south of Edinburgh.
Another of the complainants, who is still a priest, was said to have complained about inappropriate contact between him and Cardinal O’Brien, then a priest, during a parish visit. The third complainant, another priest, was said to have been invited to spend a week “getting to know” the cardinal, by that time an archbishop, at his residence in Edinburgh, and having to deal with “unwanted attention” from the senior cleric after a late-night drinking session.

Care for an apertif cutie?

The fourth man was said to have had his own experience of inappropriate contact when, in the early years of his priesthood, he sought counseling over personal problems from Cardinal O’Brien, then an archbishop.

It has emerged that a fifth claim of “inappropriate behaviour” towards a male priest has been made against Cardinal Keith O’Brien.
The 74-year-old, who denied the first set of allegations last weekend, resigned as leader of the Scottish Catholic Church on Monday.
He was due to retire this month but the resignation was brought forward.
The allegations surfaced last Saturday one day after Cardinal O’Brien told the BBC that male priests within the Catholic Church should be able to marry female partners.
The cardinal’s progressive stance on heterosexual matrimony ran counter to his views on LGBT equality.
Last November, Cardinal O’Brien was named ‘Bigot of the Year’ by a gay rights charity due to his staunch opposition to marriage equality.
In 2012, he stated that same-sex relationships were “harmful to the physical, mental and spiritual wellbeing” and compared equal marriage to slavery and child abuse.

But fun for the clergy. Well at least he wasn’t raping little boys — as far as well know –only adults men. A real Smoothie of The Semenaries no doubt. (Yes I know I’ve used this clip a lot)

In an editorial on Friday, British Catholic newspaper The Tablet said: “When Cardinal Keith O’Brien called gay marriage a ‘grotesque subversion’ and ‘madness’ it attracted widespread censure. No wonder the accusations of inappropriate behaviour as a younger man – strenuously denied – were so damning. If true, it made him look a hypocrite. For the church this was a public relations disaster.”
Meanwhile, the Scotsman newspaper reports that the resignation of Cardinal Keith O’Brien was triggered by a claim of inappropriate behaviour towards a priest in 2001 that was lodged with the Vatican in October.
It is the fifth such allegation to be made public and also the most recent – allegations in the Observer dated back to the 1980s.
The complaint is said to have given other men confidence to come forward with allegations against the cardinal.