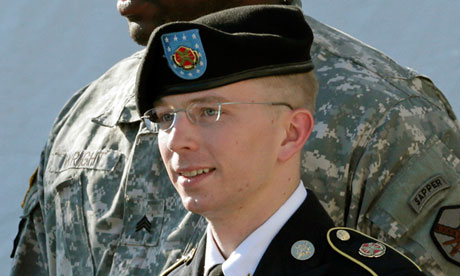 Bradley Edward Manning (born December 17, 1987) is a United States Army soldier who was arrested in May 2010 in Iraq on suspicion of having passed classified material to the website WikiLeaks. He was charged with a number of offenses, including communicating national defense information to an unauthorized source and aiding the enemy, a capital offense, though prosecutors said they would not seek the death penalty. He was arraigned in February 2012 at Fort Meade, Maryland, where he declined to enter a plea. The trial is expected to begin in June 2013.
Assigned to an army unit based near Baghdad, Manning had access to databases used by the United States government to transmit classified information. He was arrested after Adrian Lamo, a computer hacker, cooperated with the Department of Defense, stating Manning had confided during online chats that he had downloaded material from these databases and passed it to WikiLeaks. The material included videos of the July 12, 2007 Baghdad airstrike and the 2009 Granai airstrike in Afghanistan; 250,000 United States diplomatic cables; and 500,000 army reports sometimes called Iraq War logs and Afghan War logs. It was the largest set of restricted documents ever leaked to the public. Much of it was published by WikiLeaks or its media partners between April and November 2010.

Manning was held from July 2010 in the Marine Corps Brig, Quantico, Virginia, under Prevention of Injury status, which entailed de facto solitary confinement and other restrictions that caused international concern. In April 2011, 295 academics – many of them prominent American legal scholars – signed a letter arguing that the detention conditions violated the United States Constitution. Later that month, the Pentagon transferred him to Fort Leavenworth, allowing him to interact with other detainees.
Reaction to his arrest was mixed. Denver Nicks, one of Manning’s biographers, writes that the leaked material, particularly the diplomatic cables, was widely seen as a catalyst for the Arab Spring that began in December 2010, and that Manning was viewed as both a 21st-century Tiananmen Square Tank Man and an embittered traitor. Several commentators focused on why an apparently very unhappy Army private had access to classified material, and why no security measures were in place to prevent unauthorized downloads.
On February 28, 2013, Manning pled guilty to 10 of the 22 charges against him, which could carry a sentence of up to 20 years. One notable charge he did not enter a plea for is the charge of “aiding the enemy”, which could carry a life sentence. The judge must choose if she will accept the pleas; prosecutors will pursue a court martial on the remaining charges.

Today, Freedom of the Press Foundation is publishing the full, previously unreleased audio recording of Private First Class Bradley Manning’s speech to the military court in Ft. Meade about his motivations for leaking over 700,000 government documents to WikiLeaks. In addition, we have published highlights from Manning’s statement to the court.
While unofficial transcripts of this statement are available, this marks the first time the American public has heard the actual voice of Manning.

He explains to the military court in his own cadence and words how and why he gave the Apache helicopter video, Afghanistan and Iraq Wars Logs, and the State Department Diplomatic Cables to WikiLeaks. Manning explains his motives, noting how he believed the documents showed deep wrongdoing by the government and how he hoped that the release would “spark a domestic debate on the role of the military and our foreign policy in general as it related to Iraq and Afghanistan.” In conjunction with the statement, Private First Class Manning also pleaded guilty to 10 of the 22 charges against him.

The inestimable value of this video is excruciatingly obvious.

The information provided by Manning has uncovered stories of wrongdoing by the United States, as well as by leaders and politicians around the world. The cables were reportedly one of the catalysts that led to the Arab Spring and sped up the end of the Iraq War. To this day, more than two years after their release, the information provided by Manning is used every day by journalists and historians in major publications are the world to enlighten and inform the public, both in the United States and around the world. In a time when the extent and reach of U.S. government secrecy is unprecedented, and there are credible reports that the government has abused its secrecy and classification systems to cover up numerous illegal and unconstitutional activities, Manning’s actions should be seen as an overdue sliver of sunlight into an overly secret system rather than as a basis for a prosecution seeking decades of imprisonment.
By releasing this audio recording, we wish to make sure that the voice of this generation’s most prolific whistleblower can be heard—literally—by the world. Regardless of whether one believes that Manning’s acts were right or wrong or a mix of both, he has taken responsibility for them by pleading guilty to ten charges, for which he faces up to twenty years in prison. The government however, is continuing to pursue all of the charges against him, including charges under the Espionage Act and “aiding the enemy” —which could have huge consequences for press freedom and the First Amendment. The ACLU has expressed concern that this “aiding the enemy” charge could criminalize speech for all sorts of active military members, noting that “In its zeal to throw the book at Manning, the government has so overreached that its ‘success’ would turn thousands of loyal soldiers into criminals.”
And Harvard Law professor Yochai Benkler has argued that this prosecution could decimate national security journalism by outlawing whole categories of journalist-source relationships in the future: “[T]he prosecutors seem bent on using this case to push a novel and aggressive interpretation of the law that would arm the government with a much bigger stick to prosecute vaguely-defined national security leaks, a big stick that could threaten not just members of the military, but civilians too.”
Extreme secrecy in our courts, just like in our government’s policies and our politics, is an anathema to democracy. Whether military or civilian, this type of closed-door legal process impairs the public’s right-to-know and journalists’ ability to report on matters of deep public concern. The courtrooms of America should be open to the public, so they can see and hear what is being done in their name.

IOW the myth of the “Free Press” is exposed for the lie that it is at last.

Those who knew Manning told Denver Nicks, author of Private: Bradley Manning, WikiLeaks, and the Biggest Exposure of Official Secrets in American History (2012), that he always had a mind of his own; he was openly opposed to religion, for example, and remained silent during the part of the Pledge of Allegiance that refers to God. When he was 13 he began to question his sexual orientation, and around this time his parents divorced and his father remarried; Manning and his mother moved out of the house to a rented apartment in Crescent. His father’s second wife was also called Susan, and Manning apparently reacted badly when the second wife’s son by a previous relationship changed his surname to Manning. When he found out about it, he started taking running jumps at the walls, and told his mother: “I’m nobody now.”
In November 2001 Manning and his mother left the United States and moved to Haverfordwest, Wales, where his mother had family. Manning attended the town’s Tasker Milward secondary school, where they nicknamed him “Bradders.” A schoolfriend there told Ed Caesar for The Sunday Times that Manning’s personality was “unique, extremely unique. Very quirky, very opinionated, very political, very clever, very articulate.” His interest in computers continued, and in 2003 he and a friend set up a website, angeldyne.com, a message board that offered games and music downloads.

He became the target of bullying at the school because he was the only American. The students would imitate his accent, and they apparently abandoned him once during a camping trip. His aunt told The Washington Post: “[H]e woke up, and all the tents around him were gone. They left while he was sleeping.” He was also targeted because of being considered “effeminate.” Nicks writes that he had told two of his friends in Oklahoma that he was gay, but he was not open about it at school in Wales.

A not at all unfamiliar tale.

What is to be done with Private Bradley Manning? It’s obvious that he will remain in prison for some time. Perhaps for the rest of his life. His life is over in any event. And even if the sentence to be handed down is not as harsh as we rightly expect the sentence he haded down on himself is already in effect.

Sing us out boys