HERE IS IS — POPE FRANCIS!

Or maybe it was another Francis. 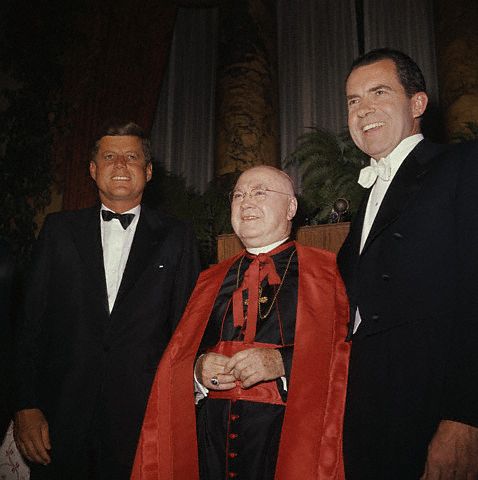 Still I was hoping for someone exciting.

So what have they got ?

Jorge Bergoglio was born in Buenos Aires, one of the five children of an Italian railway worker and his wife. After studying at the seminary in Villa Devoto, he entered the Society of Jesus on March 11, 1958. Bergoglio obtained a licentiate in philosophy from the Colegio Máximo San José in San Miguel, and then taught literature and psychology at the Colegio de la Inmaculada in Santa Fe, and the Colegio del Salvador in Buenos Aires. He was ordained to the priesthood on December 13, 1969, by Archbishop Ramón José Castellano. He attended the Philosophical and Theological Faculty of San Miguel, a seminary in San Miguel. Bergoglio attained the position of novice master there and became professor of theology.
Impressed with his leadership skills, the Society of Jesus promoted Bergoglio and he served as provincial for Argentina from 1973 to 1979. He was transferred in 1980 to become the rector of the seminary in San Miguel where he had studied. He served in that capacity until 1986. He completed his doctoral dissertation in Germany and returned to his homeland to serve as confessor and spiritual director in Córdoba. Bergoglio succeeded Cardinal Quarracino on February 28, 1998. He was concurrently named ordinary for Eastern Catholics in Argentina, who lacked their own prelate. Pope John Paul II summoned the newly named archbishop to the consistory of February 21, 2001 in Vatican City and elevated Bergoglio with the papal honors of a cardinal. He was named to the Cardinal-Priest of Saint Robert Bellarmino

As cardinal, Bergoglio was appointed to several administrative positions in the Roman Curia. He served on the Congregation of Clergy, Congregation of Divine Worship and Sacraments, Congregation of Institutes of Consecrated Life and the Congregation of Societies of Apostolic Life. Bergoglio became a member of the Commission on Latin American and the Family Council.
As Cardinal, Bergoglio became known for personal humility, doctrinal conservatism and a commitment to social justice. A simple lifestyle has contributed to his reputation for humility. He lives in a small apartment, rather than in the palatial bishop’s residence. He gave up his chauffeured limousine in favor of public transportation, and he reportedly cooks his own meals.
Upon the death of Pope John Paul II, Bergoglio, considered papabile himself, participated in the 2005 papal conclave as a cardinal elector, the conclave that selected Pope Benedict XVI. A widespread theory says that he was in a tight fight with Ratzinger until he himself adviced crying[clarification needed] not to be voted. Earlier, he had participated in the funeral of Pope John Paul II and acted as a regent alongside the College of Cardinals, governing the Holy See and the Roman Catholic Church during the interregnum sede vacante period. Cardinal Bergoglio remains eligible to participate in conclaves that begin before his 80th birthday on December 17, 2016.
During the 2005 Synod of Bishops, he was elected a member of the Post-Synodal council. Catholic journalist John L. Allen, Jr. reported that Bergoglio was a frontrunner in the 2005 Conclave. An unauthorized diary of uncertain authenticity released in September 2005[4] confirmed that Bergogolio was the runner-up and main challenger of Cardinal Ratzinger at that conclave. The purported diary of the anonymous cardinal claimed Bergoglio received 40 votes in the third ballot, but fell back to 26 at the fourth and decisive ballot.
On November 8, 2005, Bergoglio was elected President of the Argentine Episcopal Conference for a three-year term (2005–2008) by a large majority of the Argentine bishops, which according to reports confirms his local leadership and the international prestige earned by his alleged performance in the conclave. He was reelected on November 11, 2008.

And now the “Issues.”

Not exactly a shocker.

He has affirmed church teaching on homosexuality, though he teaches the importance of respecting individuals who are homosexual. He strongly opposed legislation introduced in 2010 by the Argentine Government to allow same-sex marriage. In a letter to the monasteries of Buenos Aires, he wrote: “Let’s not be naive, we’re not talking about a simple political battle; it is a destructive pretension against the plan of God. We are not talking about a mere bill, but rather a machination of the Father of Lies that seeks to confuse and deceive the children of God.” He has also insisted that adoption by homosexuals is a form of discrimination against children. This position received a rebuke from Argentine president Cristina Fernández de Kirchner, who said the church’s tone was reminiscent of “medieval times and the Inquisition”.

I thought the church was opposed to Stonewall ?

On April 15, 2005, a human rights lawyer filed a criminal complaint against Bergoglio, accusing him of conspiring with the junta in 1976 to kidnap two Jesuit priests, whom he, as superior of the Society of Jesus of Argentina in 1976, had asked to leave their pastoral work following conflict within the Society over how to respond to the new military dictatorship, with some priests advocating a violent overthrow. Bergoglio’s spokesman has flatly denied the allegations. No evidence was presented linking the cardinal to this crime

Well enough of that. Let’s get down to monkey business. 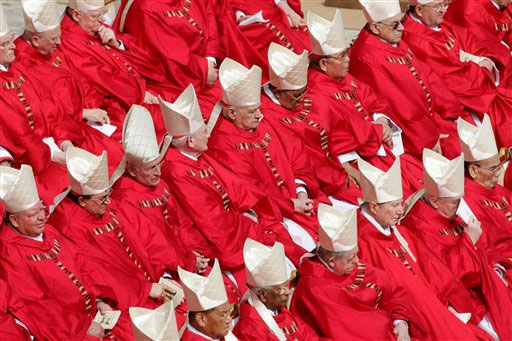 When it comes to “the feeling of discomfort when simultaneously holding two or more conflicting ideas, beliefs, values or emotional reactions,” aka.Cognitive Dissonance, few can beat the self-styled “Mainstream Media’s” when it reports on the Catholic Church. One the one hand it has given the election of a new Pope all the flash and filigree afforded the Academy Awards. On the other the “Mainstream.” knows perfectly well that the real story is chickens coming home to roost. Decades of world-wide sex crimes by priests and ceaseless cover-ups by high-ranking church officials willfully moving these pedophile rapists from parish to parish without turning them over to the authorities or even removing them from the priesthood has finally reached critical mass, with legal if not clerical consequences . Yet it persists in saying next to nothing about it. Oh yes arrests and indictments are reported, and “scandals” are given a good gloss, but don’t expecting anything “in depth,” cause it’s not coming.
This January Los Angeles Archbishop Roger Mahony was removed from public and episcopal duties following the release of personnel files documenting priestly sexual abuse cases during his tenure. This has not prevented him from going to Rome to vote for the new Pope. Nor is he at any risk for excommunication – even as his risk of criminal prosecution is far from over. But Mahony is just one story. In 2004, Thomas Ludger Dupré of Maryland became the first Catholic bishop ever to be indicted of sexual abuse However, the Springfield district attorney’s office was forced to drop the charges because the statute of limitations had run out (a maddeningly common occurrence with clerical crimes.) He was put into St. Luke’s Institute, a private Catholic hospital where he shall doubtless stay. He shall also remain a Bishop. More strikingly in 2011, a county grand jury indicted both the Kansas City Diocese and Bishop Robert Finn personally for failure to report suspected child abuse. He is the first U.S. bishop to be criminally charged for his role as a supervisor of priests, and the first criminal case against a sitting bishop in the Catholic Church. All charges against the Diocese itself were dropped, but was convicted on one charge in September 2012 and sentenced to two years of probation. Like Dupré, Finn remains a Bishop. And like Finn his story wasn’t recounted by the “Mainstream” until it was over. These men are of course the mere tip of the iceberg the church has built around pedophile rapists whose victims have been as young as three years old. For one such as I, a Catholic whose disenchantment with the church arrived simultaneously with the discovery of my same-sex orientation that these crimes have gone unchecked for so long isn’t surprising. The embarrassment of the victim’s parents over sexual activity, coupled with the church’s ability at intimidation maintained silence, until recent culture shifts involving the franks and open sexual discussion came to pass. Even then widespread disbelief that a “man of God” pledged to celibacy could not only have such untoward thoughts but enact them on children maintained the status quo. And that’s not to mention the disinclination of the fourth estate to advance even so much as a discouraging word about those deemed “holy.”
Today prosecutions have piled up so thick and fast against not only cassock-clad sex criminals but the church hierarchy that shielded them that the “Congregation For the Doctrine of the Faith,” the church’s clerical-protective arm, is bucking under the strain. Since 1981 that organization was run by one Cardinal Joseph Ratzinger, who stepped down when he was elected Pope Benedict XVI. He isn’t going to be returning to his old job in the wake of his sudden abdication. And there’s clearly a story of immense import in what that abdication portends for his and the church’s future. Yet our famousy “Free Press” will be loathe to ask Pope Franny about any of this, much less what The UK’s “Independent” discovered regading the fact that “the Holy See had purchased a €23 million (£21 million) share of a Rome apartment block that houses Europe’s biggest gay sauna.”

Got your breath back? Good, the “Independent” has more. “The senior Vatican figure sweating the most due to the unlikely proximity of the gay Europa Multiclub is probably Cardinal Ivan Dias, the head of the Congregation for Evangelisation of Peoples, who is due to participate in tomorrow’s election at the Sistine Chapel. . .This 76-year-old “prince of the church” enjoys a 12-room apartment on the first-floor of the imposing palazzo, at 2 Via Carducci, just yards from the ground floor entrance to the steamy flesh pot. There are 18 other Vatican apartments in the block, many of which house priests.” Moreover “The sauna’s website promotes one of its special “bear nights”, with a video in which a rotund, hairy man strips down before changing into a priest’s outfit. It says Bruno, “a hairy, overweight pastor of souls, is free to the music of his clergyman, remaining in a thong, because he wants to expose body and soul” Go “Google” to read all about it via the UK, for you won’t find it here in the U.S.

Back in the late 1980’s I approached a Los Angeles “alterative newspaper” (now long ceased publication) with a story I had discovered first hand. A pair of priest, wanted for sex crimes in the east had been relocated to Palm Springs where they were not only on call to a local parish but running a gay “clothing optional” bed and breakfast on the side.

When I recounted this to the “alternative” editors I was regarded with a look suggesting I’d just announced that the Martians had landed. The priest were later discovered and prosecuted but no story of what they had been up to ever made it stateside. For those such as I who long for full disclosure of clerical crime “there’ll always be an England.”

And there’ll always be an Italy too.