The World’s Worst Newspaper is in a nostalgic mode

Half a century after the nation’s fateful early missteps into the quagmire, what are Americans likely to remember about the Vietnam War?
A Buddhist monk, doused with gasoline, squatting stoically in the street as roaring flames consume his body.
An enemy prisoner grimacing as a bullet fired from a pistol at the end of an outstretched arm enters his brain.
A 9-year-old girl running naked down the road, screaming as her skin burns from napalm. 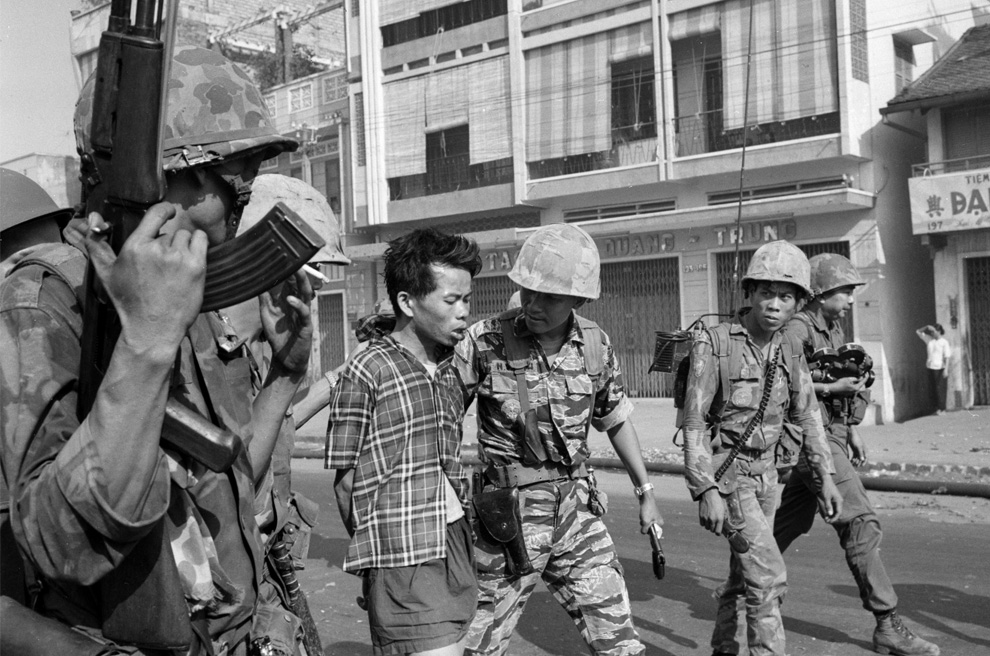 Perhaps even more viscerally even than on television, America’s most wrenching war in our time hit home in photographs, including these three searing prize-winning images from The Associated Press newsmen Malcolm W. Browne, Eddie Adams and Nick Ut. They are the subject of retrospectives now, in a new book and accompanying exhibitions.
No single news source did more to document the bitter and costly struggle against North Vietnamese Communist regulars and Vietcong insurgents, and to turn the home front against the war, than The A.P.

Indeed. While Vietnam has been “remembered’ by the Doxa as “The Television War” images like this didn’t get on television. They were the province of print journalism.

Vietnam was a journalistic milestone: according to Daniel C. Hallin, professor of communication at the University of California, San Diego, and author of “The Uncensored War: The Media and Vietnam,” it was “the first war in which reporters were routinely accredited to accompany military forces, yet not subject to censorship.”
Hitching helicopter rides to battle zones while remaining free to write and shoot pictures, journalists made the most of it, recalled Richard Pyle, The A.P.’s Saigon bureau chief from 1970 until 1973. “Vietnam was where photojournalism came into its own, and kind of stayed there,” he said.

And in the process altered the culture. Jean-Luc Godard and Jean-Pierre Gorin went so far as to make an entre film about a news photograph.

“Photographs may be more memorable than moving images, because they are a neat slice of time, not a flow,” Susan Sontag wrote in her book “On Photography.” The photograph of the girl burned by napalm, she wrote, “probably did more to increase the public revulsion against the war than a hundred hours of televised barbarities.” And arguably even more effective was THIS

Today’s war photographers produce work “every bit as good as anything out of Vietnam,” said Michael Kamber, a freelance photographer who covered Iraq for The New York Times and is the author of “Photojournalists at War.” “But when you put more stuff on the Internet, it competes with more stuff on the Internet.”
Back then, he said, “great photographs had tremendous staying power: you didn’t have access to billions of photos.”

Possibly. But guts are required. Shortly after “Gen. Nguyen Ngoc Loan, chief of the national police, shot a suspected Vietcong official, Nguyen Van Lem, Feb. 1, 1968″ was taken, Nagisa Oshima made Three Resurrected Drunkards , a satirical comedy about Japanese anti-Korean prejudice it starred the pop group The Folk Crusaders as a trio of Japanese boys mistaken for Koreans — and therefore suffering the prejudicial disdain the Japanese render on Koreans. At the same time the film is a protest against the Vietnam war. For our anti-heroes play a game in which Nguyen Ngoc Loan’s execution is acted out. Quite remarkable.

Take it away kids.