Fait Diver: “Give Us A Kiss”

From a very strange Slate review of American Mirror, a “massive” new biography of THIS dude:

whose all-too-familiar illustrations include – American Mirror’s most controversial point will likely be Solomon’s conclusion that part of the sexless character of Rockwell’s oeuvre can be traced to his own repression, specifically the fact that he was attracted to men but unable to express it. While living in New Rochelle, Rockwell forged an extremely intimate relationship with the Leyendecker brothers, famous illustrators who created the proto-metrosexual “Arrow Collar Man,” and were gay. 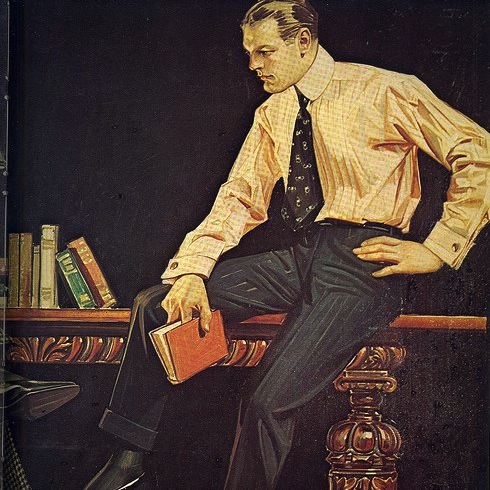 Seeking therapy in the late ’50s, Rockwell apparently confessed to having “overly intense relationships” with men, though he was so reserved, even in his private correspondence, that it is hard to know what he meant by this. Piecing together the details of a two-week-long long fishing trip he took to Canada in 1934 with his handsome model and studio assistant, Fred Hildebrandt, Solomon comes to a suggestive dead end:
“The trip raises a complicated question: Was Rockwell homosexual? It depends on what you mean by the word. He demonstrated an intense need for emotional and physical closeness with men. From the viewpoint of twenty-first-century gender studies, a man who yearns for the company of men is considered homosexual, whether or not he has sex with other men. In Rockwell’s case, there is nothing to suggest that he had sex with men. The distinction between secret desires and frank sexual acts, though perhaps not crucial to theorists today, was certainly crucial to Rockwell.”

So what do you want dear? A blue cum-stained dress from The GAP ?

Still you don’t have to be straight to be clueless. Consider this self-loathing lesbian legislator who voted against Marriage Equality in Hawaii. As she “explains” herself –

I always have taken my personal hat off, my personal beliefs away from it, and said, “Look at the substance, what is the measure, have you heard all the dialogue, have you vetted everything? Have all your questions been answered? And are you willing to make a decision for the 1.4 million people in the state?” For your constituents, but also for the whole state.

I know who I am, I’m grounded in who I am, I’ve never hid who I am. And when I walked in this door, the GLBT community came knocking on my door and they said, “We’re so glad you’re here. Come on in here.” And I’m like, “I’m Jo, I’m a legislator, those are my hats first.”

I know what it meant to step in this room for a kid from Waianae, who graduated from public school, who has no background, to be a female and to be GLBT on top of that. And I didn’t want to come up the gate saying, “Look at me, here I am.” Because it would distract from anything that I worked on. I have never waved my flag. I don’t wear it across my chest.

I had come to the decision that SB1 needed to amended. It wasn’t protective enough for everybody. And I truly know, my GLBT community is not going to go somewhere where they are not welcome. They are not going to go, “Pastor, you need to marry us, even though it is against your grain.” Because they want their happy day to be a happy day. A couple isn’t going to step into something that’s not warm and welcoming. We’re really looking at those fringe guys, those ones that pop up on the edges that say, “You’re treading on my rights, so I’m going to come and challenge you.”

When you look at a measure, you have to consider, how do we make this the golden standard, as bulletproof as possible? My major concerns on SB1 was, first, the parental maternal rights, 57-2c, that wasn’t healthy. That definitely needed to be fixed. The religious exemption was not adequate enough. And the divorce portion in there is not fair. We’re talking about creating equity. They have made a provision here where you don’t have to domicile here. And I totally get what they’re saying, but I have some serious problems with that. We should at least make some sort of domicile in our state, so they can file for divorce here.

I really am not happy with the exemptions. Too narrow.
I’m not here to protect the big churches or the little churches, I’m saying we can’t erode what’s currently out there. We don’t want to scratch at the religious protections at all, because if we don’t create a measure that’s bulletproof, or as close to bulletproof as possible, then the measure will go to the courts. And they will interpret it however that may be. A judge will make assumptions and make a ruling, and that will become the law of the land. So you really want us to create the legislation.

I haven’t figured out why I felt so compelled to fight for the religious exemptions, to not erode Constitutional rights. I don’t belong to any particular denomination. I don’t wear one of those hats. I take religion out of everything. My religion is the mountain, the aina and spiritual. Everybody finds their own religion somewhere. I have the same values as they do, but it’s just a little different. When I walked into this session, that rose to the surface. Why me? Why am I trying to protect your religious rights?

Why indeed? Happily there’s a straight Hawaii legislator who “gets it.

Thanks to Representative Ing today’s Lyndecker/Beach equivalents will be getting married in President Obama’s home state. Claybourne Elder will Sondheim us out.