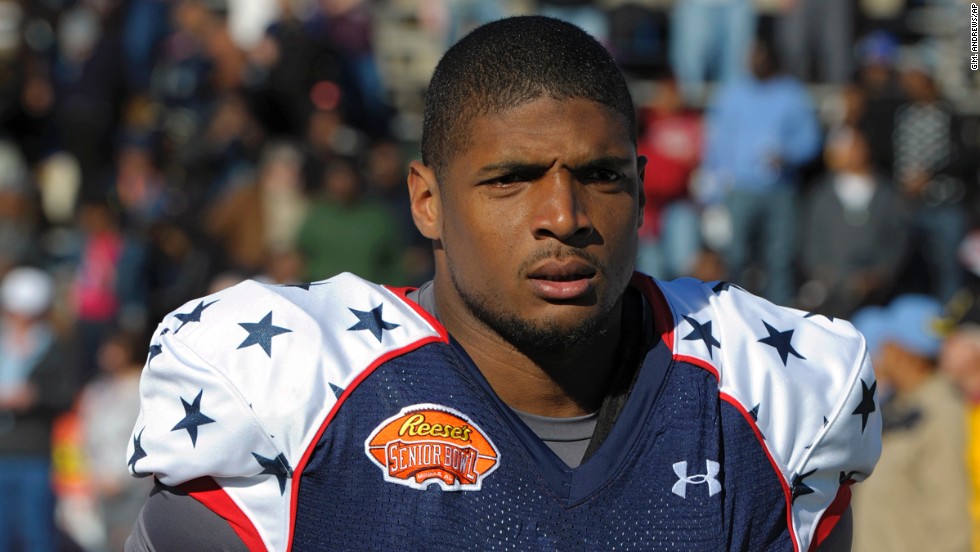 Coaches at the University of Missouri divided players into small groups at a preseason football practice last year for a team-building exercise. One by one, players were asked to talk about themselves — where they grew up, why they chose Missouri and what others might not know about them.
As Michael Sam, a defensive lineman, began to speak, he balled up a piece of paper in his hands. “I’m gay,” he said. With that, Mr. Sam set himself on a path to become the first publicly gay player in the National Football League.
“I looked in their eyes, and they just started shaking their heads — like, finally, he came out,” Mr. Sam said Sunday in an interview with The New York Times, the first time he had spoken publicly about his sexual orientation.

Mr. Sam, a senior who was listed at 6 feet 2 inches and 260 pounds, had a stellar season as Missouri finished 12-2 and won the Cotton Bowl. He was a first-team all-American and was named the Associated Press defensive player of the year in the Southeastern Conference, widely considered the top league in college football. Teammates voted him Missouri’s most valuable player.
Now Mr. Sam enters an uncharted area of the sports landscape. He is making his public declaration before he is drafted, to the potential detriment to his professional career. And he is doing so as he prepares to enter a league with an overtly macho culture, where controversies over homophobia have attracted recent attention.

As the pace of the gay rights movement has accelerated in recent years, the sports industry has changed relatively little for men, with no publicly gay athletes in the N.F.L., the N.B.A., the N.H.L. or Major League Baseball. Against this backdrop, Mr. Sam could become a symbol for the country’s gay rights movement or a flash point in a football culture war — or both.
Mr. Sam, 24, is projected to be chosen in the early rounds of the N.F.L. draft in May, ordinarily a path to a prosperous pro career. He said he decided to come out publicly now because he sensed that rumors were circulating.
“I just want to make sure I could tell my story the way I want to tell it,” said Mr. Sam, who also spoke with ESPN on Sunday. “I just want to own my truth.”
But the N.F.L. presents the potential for unusual challenges. In the past year or so, it has been embroiled in controversies ranging from antigay statements from players to reports that scouts asked at least one prospective player if he liked girls. Recently, Chris Kluwe, a punter, said that he was subject to homophobic language from coaches and pushed out of a job with the Minnesota Vikings because he vocally supported same-sex marriage laws. And last week, Jonathan Vilma, a New Orleans Saints linebacker, said in an interview with NFL Network that he did not want a gay teammate.
“I think he would not be accepted as much as we think he would be accepted,” said Mr. Vilma, a 10-year league veteran.

In a statement Sunday night, the league said: “We admire Michael Sam’s honesty and courage. Michael is a football player. Any player with ability and determination can succeed in the N.F.L. We look forward to welcoming and supporting Michael Sam in 2014.”
At a showcase game for seniors last month, several scouts asked Mr. Sam’s agent, Joe Barkett, whether Mr. Sam had a girlfriend or whether Mr. Barkett had seen him with women.

The league, which has a policy prohibiting discrimination based on sexual orientation (among other things), is the largest of the major sports leagues in the United States, with about 1,600 players on rosters at any time during the season. But it has never had a publicly gay player.
Over the decades, some players in the major sports leagues did little to conceal their sexual orientation, but they were not out to the public during their careers. A few players have come out upon retirement, like the N.F.L. player Dave Kopay in the 1970s and the N.B.A. player John Amaechi in 2007, both considered pioneers by many gay people.

Last spring, Jason Collins, a 12-year N.B.A. veteran, mostly as a little-used reserve, came out after the season. A free agent, he has not been signed by another team.
Also last year, Robbie Rogers, a former member of the United States national soccer team who later played professionally in England, revealed that he was gay after he announced his retirement. Encouraged by the supportive response, he resumed his career, playing for the Los Angeles Galaxy of Major League Soccer. 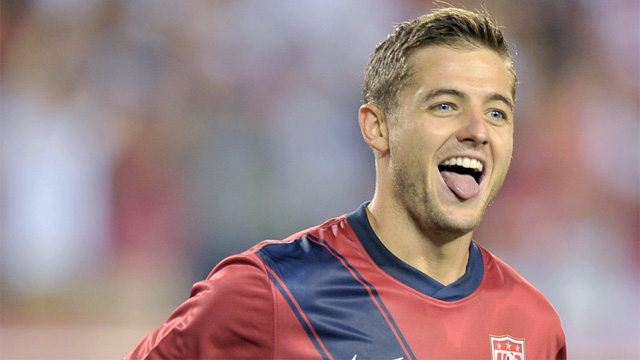 While Mr. Sam’s pro prospects are far from certain, several N.F.L. draft forecasters have predicted that he will be chosen in the third round. (Thirty-two players are selected in each round.) Rarely are players who are drafted that high cut by teams; they often become starters, sometimes as rookies.
Between now and the draft, Mr. Sam plans to attend the scouting combine, where players are put through a gantlet of physical and mental tests to judge their readiness for the N.F.L. Mr. Sam might be considered too small for an N.F.L. defensive end, meaning he would have to learn to play as an outside linebacker. But it is reasonable for Mr. Sam to wonder what sort of effect — positive or negative — his declaration will have on his prospects.
“I’m not naïve,” Mr. Sam said. “I know this is a huge deal and I know how important this is. But my role as of right now is to train for the combine and play in the N.F.L.”

Mr. Sam graduated from Missouri in December, the only member of his family to attend college. He grew up in Hitchcock, Tex., about 40 miles southeast of Houston, the seventh of eight children of JoAnn and Michael Sam. It was a difficult childhood; three of his siblings have died, and two brothers are in prison, Mr. Sam said. He was raised mostly by his mother, and he spent some years with another family. All have been supportive of his coming out, he said.

Mr. Sam said he began to wonder if he was gay in his early teens, though he had a girlfriend in high school.

It was after he arrived at Missouri in 2009 that he realized for certain that he was gay. Teammates increasingly suspected as much, and some knew that he dated a man on the university’s swim team, but it never prevented Mr. Sam from being one of the most popular players on the team. He was known for his intensity on the field and his booming voice off it.

“When I first met him, you could be downstairs and you could hear Mike all the way on the second floor of the dorms,” said receiver L’Damian Washington, who met Mr. Sam on a recruiting trip and quickly became a close friend. “He’s just a loud guy. Everybody knows when Michael Sam is in the building.”
Mr. Sam came out to two of his friends on the team, Mr. Washington and Marvin Foster, about a year ago. It was not a huge surprise. Mr. Washington was with Mr. Sam when Mr. Sam said he needed to go pick up a friend. He told Mr. Washington that the friend was gay and asked Mr. Washington if that would bother him. Mr. Washington said no, and Mr. Sam came out to him.
“Michael is a great example of just how important it is to be respectful of others,” Missouri’s football coach, Gary Pinkel, said in a statement released Sunday night. “He’s taught a lot of people here firsthand that it doesn’t matter what your background is, or your personal orientation, we’re all on the same team and we all support each other.”
Last April, the Missouri athletic administration held diversity seminars for all athletes, part of the You Can Play project, focused largely on lesbian, gay, bisexual and transgender issues. Mr. Sam was one of several athletes to approach Pat Ivey, the associate athletic director for athletic performance, to compliment him for the lesson. But Mr. Sam was the most effusive, Mr. Ivey said, as if trying to tell Mr. Ivey something.
“When Mike finished the conversation, he said, ‘Coach, I know I can play,’ ” Mr. Ivey recalled. “And we kind of had an understanding of each other, that this wasn’t just him saying, ‘Good job.’ This was him saying: ‘Coach, I’m involved in it. I’m a part of what we just discussed.’ ”
During practices in August, Missouri mixed players from different position groups on the team and put them into small meetings of 8 or 10. Mr. Washington, a wide receiver, happened to be in the same group as Mr. Sam.
“I knew that something was about to come because of the way he was balling up the paper in his hands,” Mr. Washington said. “He kept rolling it up. So I kind of knew something was coming, but I didn’t think it was that.”
Mr. Sam was a senior and a longtime friend to other team leaders. Younger players looked up to him. But on a team with about 100 players, of different backgrounds and beliefs, there was varying discomfort.
“I think there were, just like in society, there are people who don’t understand, and don’t want to understand, and aren’t accepting,” Mr. Ivey said. “And we worked through those issues.”
Mr. Sam played down any repercussions, saying he had the full support of teammates, coaches and administrators. One teammate, he said, accompanied him to a gay pride event in St. Louis last summer, and others went with him to gay bars.

“Some people actually just couldn’t believe I was actually gay,” Mr. Sam said. “But I never had a problem with my teammates. Some of my coaches were worried, but there was never an issue.”
One lingering issue, Mr. Washington said, was trying to get players to change casual language in the locker room. Loosely lobbed homophobic remarks suddenly had a specific sting.
Mr. Sam played down that, too. For him, coming out to his team was a positive step, on a path that seems as if it will lead to the N.F.L.
“Once I became official to my teammates, I knew who I was,” Mr. Sam said. “I knew that I was gay. And I knew that I was Michael Sam, who’s a Mizzou football player who happens to be gay. I was so proud of myself and I just didn’t care who knew. If someone on the street would have asked me, ‘Hey, Mike, I heard you were gay; is that true?’ I would have said yes.”
No one asked.
“I guess they don’t want to ask a 6-3, 260-pound defensive lineman if he was gay or not,” Mr. Sam said. And he laughed.