Would that Monsieur Gustave be in charge of things instead of — What about oral sex?

As usual it’s all about getting fucked in the ass

The sultan of Brunei, Hassanal Bolkiah,

began phasing in a new criminal code based on Islamic sharia law this month. Failure to attend Friday prayers and out-of-wedlock pregnancies are now punishable by fines and imprisonment. Later this year, punishments including flogging and severing of limbs will be introduced for robbery and other property crimes. Next year, death by stoning will be introduced as punishment for sodomy and adultery.

Sharia Law (which Barack Obama was supposed to have instigated with his election to the Presidency) is described thusly:

To Arabic-speaking people, sharia (shariah, shari’a, sharīʿah; Arabic: شريعة‎ šarīʿah, IPA: [ʃaˈriːʕa], “legislation”), also known as Islāmī qānūn (اسلامی قانون), means the moral code and religious law of a prophetic religion. In English usage, the term “sharia” has been largely identified with Islam.
Sharia deals with many topics addressed by secular law, including crime, politics, and economics, as well as personal matters such as sexual intercourse, hygiene, diet, prayer, everyday etiquette and fasting. Though interpretations of sharia vary between cultures, in its strictest and most historically coherent definition it is considered the infallible law of God—as opposed to the human interpretation of the laws (fiqh). Historically however, much of Sharia has been implemented in its strictest understanding.
There are two primary sources of sharia law: the precepts set forth in the Quranic verses (ayahs), and the example set by the Islamic prophet Muhammad in the Sunnah.Where it has official status, sharia is interpreted by Islamic judges (qadis) with varying responsibilities for the religious leaders (imams). For questions not directly addressed in the primary sources, the application of sharia is extended through consensus of the religious scholars (ulama) thought to embody the consensus of the Muslim Community (ijma). Islamic jurisprudence will also sometimes incorporate analogies from the Quran and Sunnah through qiyas, though many scholars also prefer reasoning (‘aql) to analogy.
The introduction of sharia is a longstanding goal for Islamist movements globally, including in Western countries, but attempts to impose sharia have been accompanied by controversy, violence, and even war. In Egypt and Algeria, there is an on-going controversy and conflicting views on sharia, between Islamists and Muslims who oppose them.Most countries do not recognize sharia; however, some countries in Asia, Africa and Europe recognize sharia and use it as the basis for divorce, inheritance and other personal affairs of their Islamic population In Britain, the Muslim Arbitration Tribunal makes use of sharia family law to settle disputes, and this limited adoption of sharia is controversial.

The concept of crime, judicial process, justice and punishment embodied in sharia is different from that of secular law.The differences between sharia and secular laws have led to an on-going controversy as to whether sharia is compatible with secular democracy, freedom of thought, and women’s rights.In secular jurisprudence, sharia is classified as religious law, which is one of the three major categories that individual legal systems generally fall under, alongside civil law and common law.

Homosexual sex is illegal under sharia law, though the prescribed penalties differ from one school of jurisprudence to another. For example, only a few Muslim-majority countries impose the death penalty for acts perceived as sodomy and homosexual activities: Iran, Nigeria, Saudi Arabia, and Somalia. In other Muslim-majority countries such as Egypt, Iraq, and the Indonesian province of Aceh, same-sex sexual acts are illegal, and LGBT people regularly face violence and discrimination. In Turkey, Bahrain and Jordan, homosexual acts between consenting individuals are legal. There is a new movement of LGBT Muslims, particularly in Jordan, the UK with Imaan and Al-Fatiha in America. Books such as Islam and Homosexuality by Siraj Scott has also contributed to playing a proactive role in LGBT- and Islam-related ideas.”

The sultan, one of the world’s wealthiest men, said in a royal decree last Wednesday that the move was “a must” under Islam, dismissing “never-ending theories” that sharia punishments were cruel in comments clearly aimed at detractors.
According to the Agence France-Presse:
The sultan first proposed the sharia penal code in 1990s, and in recent years has increasingly warned of rising crime and pernicious outside influences including the internet. He has called Islam a ‘firewall’ against globalisation. He announced the implementation plans in October. … Muslim ethnic Malays, who make up about 70% of the population, are broadly supportive of the move by their revered father-figure. But some Malays and non-Muslim citizens privately express unease. About 15% of Brunei’s people are non-Muslim ethnic Chinese.
The move could indicate the sultan is becoming more conservative as he ages, said Joseph Chinyong Liow, a Singapore-based professor of Muslim politics. ‘The sultan himself is at a point where there is a need to come to terms with religious identity, both personally and for the country,’ he said.
Most of the punishments can be applied to the one-third of Brunei residents who are not Muslim, the Associated Press reported.

On Monday, the Motion Picture & Television Fund joined a growing list of organizations boycotting the hotel chain when it pulled its star-studded annual Night Before the Oscars party, which has been held at the Beverly Hills Hotel for years, citing Brunei’s “outrageous and unacceptable legal code.

Such a lovely hotel. 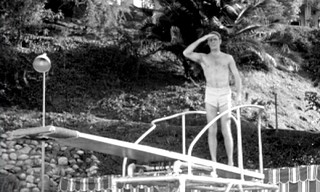 Others boycotting the hotel chain include the Hollywood Reporter and the Feminist Majority Foundation, which organized a protest that took place Monday across the street from the hotel. Jay Leno joined the protesters along with his wife, Mavis, who is on the Foundation’s board.
“The Beverly Hills Hotel is like the Clippers; the Sultan of Brunei is like Donald Sterling,” the former “Tonight Show” host said, according to the Los Angeles Times. “Does that make it clear?” (Sterling, who owns the Los Angeles Clippers, was banned from the NBA for life last week and fined $2.5 million for racist remarks.)

Why bring Jabba the Hutt into this?

The racist Clippers owner and slumlord hasn’t executed anyone

as far as we know.

But there’s no doubt the Sultan will be as determined as Jabba to hang onto his property — even as its value evaporate.

Christopher Cowdray, the chief executive officer of the Dorchester Collection,

In another statement, Cowdray noted that “today’s global economy needs to be placed in a broader perspective.”

Broader than Sharia Law? I doubt it.

Such a lovely place.