But a kiss is more than just a kiss when Michael Sam is smooching Vito Cammisano.

Talk about “Up Close and Personal”!

Of course football players have same-sex kissed before

But TIMMEH’s career is over. Sam’s is just starting 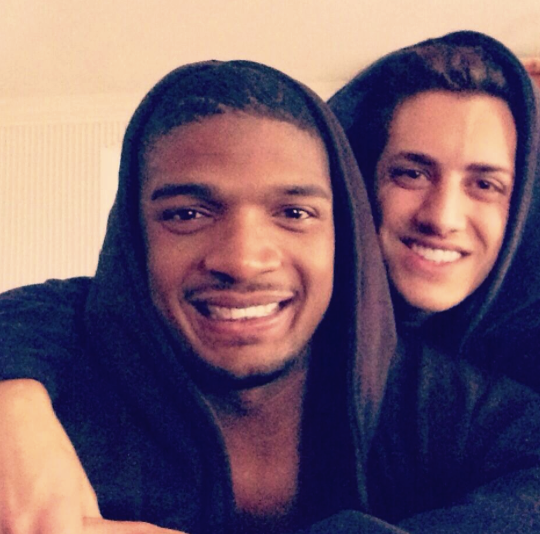 So who is the guy that Michael Sam was photographed kissing after he was chosen in the NFL Draft on Saturday? Vito Cammisano may be a new name to many, but not on the University of Missouri campus.
Cammisano, who swam for Missouri from 2009-2012, came out as gay in 2011. But since it’s not football or basketball, hardly anyone outside of Columbia noticed. Here’s Cammisano in a Feb., 2014 article in the Columbia Missourian, talking about Greg DeStephen, a gay swimmer who came out in 2008.
He created an environment wherein Missouri swimmer Vito Cammisano came out to the team in 2011 and says he experienced zero anti-gay sentiment.
“I’m completely appreciative that Greg did everything he could to make that possible for people that came after him,” says Cammisano, who swam for Missouri from 2009 to 2012.
Cammisano is currently an intern at Cumulus Broadcasting.
Why is it that a gay football player makes for big news, but a college swimmer who came out three years ago is virtually ignored? The Daily Mail, for example, isn’t even sure which athlete first came out as gay at Missouri. The DM listed Cammisano as the first, when actually it was DeStephen, three years earlier.
Is it just that football and basketball are higher profile sports, and therefore more people notice? Hard to figure. I think it may have something to do with their potential for going pro — and how people are treated in NFL and NBA locker rooms is big news (see Jonathan Martin, Jason Collins).

But what everyone is talking about is . . .well let Jeanette explain.

Things were VERY different back in 1971, as another Vito — Russo — explains in The Celluloid Closet

“America hated Sunday Bloody Sunday. One kiss exchanged between Head and Finch caused even more of a storm than scenes that showed them in bed together”

But then there’s this –