Surely the facts are of no concern to Republican Presidential aspirants But in Rick Perry’s case it’s especially striking.

“Whether or not you feel compelled to follow a particular lifestyle or not, you have the ability to decide not to do that,” Perry said. “I may have the genetic coding that I’m inclined to be an alcoholic, but I have the desire not to do that, and I look at the homosexual issue the same way.”
The large crowd gathered at the InterContinental Mark Hopkins hotel on Nob Hill included many Perry supporters. But the comment still drew a murmur of disbelief.

“I don’t think it’s sticking my neck out. I think it’s just standing on my feet and saying what I believe.” So declared Glen Maxey last week, a couple of days after self-publishing ‘Head Figure Head: The Search for the Hidden Life of Rick Perry’. 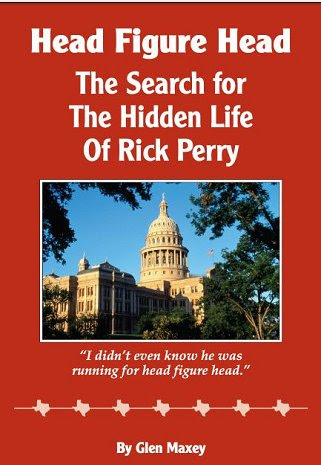 The book is former Austin state rep (and first and only openly gay Texas legislator) Maxey’s saga of his attempts to finally confirm some of the persistent rumors about the governor’s alleged walks on the wild side – that is, that Perry may have engaged in sex with men. Of that central and loaded question, Maxey writes bluntly: “Has Rick Perry had sex with men? Personally, I believe he has.”

Those of us familiar with flamboyant ‘phobes can only say “Well DUH!”

His book recounts the fairly graphic tales of two major (unnamed) sources who Maxey believes engaged in sex with Perry; a former state official (onetime Secretary of State Geoff Connor) who twice declined to deny the long-standing rumors about his relationship with Perry;

(Such a cute couple.)

and a brace of secondary sources who independently said they knew, directly or indirectly, of Perry’s dalliances with men. Maxey quotes approvingly one of his Facebook correspondents: “I’ve heard too many stories, first hand kind of stuff, from too many people, some of whom are totally apolitical and have no agenda, not to believe.”
The Perry campaign dismissed the book as “false Internet garbage.”

It’s not on the net You can buy it on Amazon.

Initially, Maxey was collaborating with a reporter (“The Journalist”) for a “National News Outlet” – unidentified in the book, but outed last week by Politico as Jason Cherkis of the Huffington Post. It eventually became clear that Cherkis’ story was unlikely to be published. (Despite editorial and legal clearance, Arianna Huffington spiked it, last week telling Politico’s Ken Vogel, there was “simply no there there.”)

That Arianna choked is no surprise, in light of her personal history with gay men. Perry campaign spokesman Ray Sullivan suggested to Vogel that Huffington killed the story to avoid a lawsuit, but Cherkis told the Chronicle: “I went to Austin in early summer to research a variety of Perry stories. While there, I broke a number of stories – including one on Perry’s college transcripts and one on an insurance scheme he brokered. I also talked to two sources for a piece on Perry’s personal life. As neither would go fully on the record – a condition we placed on the story before it could be published – we did not proceed.”

Maxey decided that he could tell the story simply as the narrative of his search to find out the truth about Perry. “I’m not a journalist,” he told the Chronicle last week. “I don’t have to have people on the record – I can just tell the story of my search and let people make their own decision.” He also wanted to release the story while Perry was still on the presidential campaign trail, so he self-published the book via Amazon’s high-speed online process; the book even includes a reference to Perry’s notorious early December “Strong” TV ad, which, Max­ey writes, “suggests that it’s wrong to let gays and lesbians serve openly in the military.”
Aside from its allegations about Perry’s sex life, Head Figure Head (the title is a quote from a source who hadn’t even known that Perry was running for “head figure head”) provides a capsule history of Maxey and Perry’s political careers and specifically Perry’s relatively recent turn toward anti-gay rhetoric and policies as a wedge tactic for right-wing votes. Maxey traces that to Perry’s 2005 grandiose signing of a state constitutional amendment banning gay marriage, in a shift Maxey calls “pure hypocrisy and pure opportunism.” And in a chapter titled “What Is ‘Gay’?,” he declines to formally apply the honorific term to Perry’s alleged sexual escapades. “Being gay is much more than just sex,” Maxey writes. “Being gay is having an emotional relationship with a member of the same sex.”

Media response has been slow but is beginning to build. Gawker published a brief but explicit summary of the book’s major allegations, and Politico followed with a lengthier story that addressed the sexual substance only indirectly, focusing instead on the involvement of high-powered Atlanta libel lawyer L. Lin Wood defending both Perry and Herman Cain on similar matters. Other online sites (Burnt Orange Report, Queerty, Dallas Voice, etc.) have also reported on the book. Queerty followed with a Maxey interview, and Maxey has created his own site, Is Rick Perry Gay? (www.isrickperrygay.org), to collect and report additional Perry tips. Maxey said the book features three major stories and nine others that “lead me to believe” in Perry’s escapades; as of last week, he said, he had accumulated 26 such independent tips, and they’re still coming.
The Chronicle asked both the Perry campaign and the Governor’s Office for any comment on the book’s publication or its contents. Campaign spokesman Sullivan replied in an email, “This self-published book is false Internet garbage and unworthy of comment.”

You already said that.

Asked if he thought Perry’s staggering campaign would undermine the book’s effect or relevance, Maxey said: “He’s coming back to Texas; he’s still going to be our governor, of a state that is spiraling into all kinds of chaos. We’ve still got another legislative session with him, and I do not believe we’re through with Rick Perry thinking he can run for another term as governor, be a U.S. senator, or [whatever]. So the story’s not over for those of us who are still living with Rick Perry

The Divine Miss M will sing us out