I’m sure there’s a perfectly reasonable explanation for this. Don’t you?

Updated 7:00 pm: Nonstop Israeli jet, tank and naval attacks targeting homes and a hospital killed at least 31 people in Gaza Monday, bringing the death toll in a two-week-long assault on the besieged strip to 548.
In the latest bloodshed, tank-shelling on a hospital in Deir al-Balah in central Gaza killed four people, and a family of nine was killed in the southern city of Rafah, seven of them children, Gaza health ministry spokesperson Ashraf al-Qudra said.

Hundreds of people meanwhile could be seen flooding out of the northern town of Beit Hanoun, a day after many thousands fled an intensive Israeli bombardment of the eastern Gaza City district of al-Shujayeh.
Following the deadliest day in Gaza since 2009, when at least 140 Palestinians were killed on Sunday, medics pulled another 68 bodies from the rubble early Monday, emergency services spokesman Ashraf al-Qudra said.
On Sunday, at least 72 people were killed in al-Shujayeh during a relentless Israeli attack which reduced much of the district to rubble and left charred bodies lying in the streets. 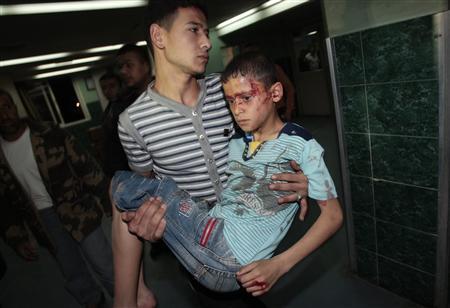 And an Israeli tank shell killed three more in the district on Monday.
Qudra said spokesman said Israeli tank shelling hit the third floor of Al-Aqsa hospital in the central Gaza Strip which housed an intensive care unit and operating theaters.
Other shells had fallen around the hospital, he added, with officials calling on the Red Cross to help evacuate patients.
Later, Israeli war jets bombed the Qassas family home in the center of Gaza City, killing nine relatives, including four children.
Residents reported heavy fighting in al-Shujayeh and the adjacent Zeitoun neighborhood near Gaza City. Three were killed in al-Shujayeh.
Locals also said there was heavy shelling in Beit Hanoun, in the northern Gaza Strip.

“It seems we are heading towards a massacre in Beit Hanoun. They drove us out of our houses with their fire. We carried our kids and ran away,” said Abu Ahmed, he did not want to give his full name for fear of Israeli reprisals.
“It was a night of horror,” the 50 year-old told Reuters.
The UN agency for Palestinian refugees UNRWA has opened 61 of its schools to shelter more than 81,000 people who have fled their homes.
The Doctors Without Borders charity urged Israel to “stop bombing civilians trapped in the Gaza Strip”, noting the majority of the injured arriving in the Al-Shifa hospital were women and children.

Tom Waits will sing us out.