Surely the facts have been rejected by the voters.

On Thursday, voters in Chattanooga, Tenn. overwhelmingly rejected a 2013 city ordinance that would have provided LGBT nondiscrimination protections to city employees as well as equal health benefits to the spouses of workers in domestic partnerships.
With 100% of precincts reporting, voters favored repealing the ordinance by a landslide — with 13,685 voting for the repeal, while only 8,184 voted to keep the ordinance, according to WTVC News Channel 9. The Chattanooga City Council first approved the ordinance in a 5-3 vote last November to provide equal benefits to the same-sex spouses of city workers in domestic partnerships, as marriage equality is not legal there. But opponents of the measure were able to gather enough signatures to force a referendum.
Opponents who organized the campaign against the ordinance said they hope the city will now respect “the will of the people,” according to the Chattanooga Times Free Press. “What we want them to take away from this is that the people have spoken,” Chattanooga Tea Party President Mark West.

The Human Rights Campaign, in a statement following the loss Thursday night, said it had committed financial support and staff to efforts to protect the ordinance. The organization’s deputy field director, Jeremy Pittman, promised HRC would keep fighting.
“Despite this hurtful and disappointing result tonight, we know that fair-minded Chattanoogans and people across Tennessee are ready to keep fighting until full equality reaches every corner of the state and every corner of this country,” Pittman said in the statement. “As LGBT equality moves forward across this country, this work isn’t over until every American can expect the same decent treatment under the law.”

Let’s see how Chattanooga survives the loss of business this vote will provoke.

The city’s mayor, Andy Berke — who supported the ordinance — said that in the wake its repeal, “I want every City employee to know one thing — your work is valued and you are important to the future of our community,” according to the WTVC report. “Regardless of the results tonight, my Administration will continue to hire and promote the best people who provide excellent service to our constituents.”

Berke would appear to believe “family values” includes families different from his own.

And now some good news.

However, voters also rejected the reelection efforts of Republican Sen. Stacey Campfield, a Tennessee state lawmaker who made national headlines for his anti-LGBT “Don’t Say Gay” legislation. Campfield only received 28% of the vote in Thursday’s primary while his opponent garnered a whopping 66%, according to the Knoxville News Sentinel. 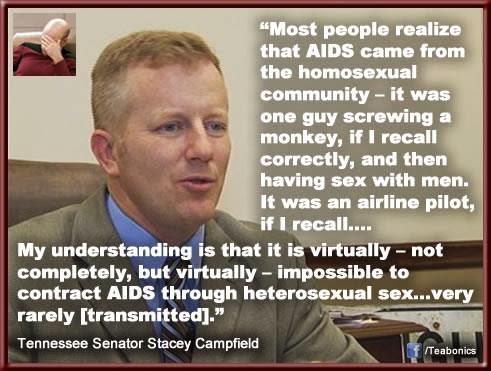 Take it away Tex