The United States of Brazil 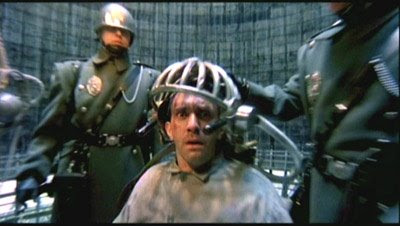 Surely the Ministry of Information will be only too happy to supply the facts.

Initially, both Ryan Reilly of the Huffington Post and I were asked for identification. I was wearing my lanyard, but Ryan asked why he had to show his ID. They didn’t press the point, but one added that if we called 911, no one would answer.
Then they walked away. Moments later, the police reemerged, telling us that we had to leave. I pulled my phone out and began recording video.
An officer with a large weapon came up to me and said, “Stop recording.”
I said, “Officer, do I not have the right to record you?”
He backed off but told me to hurry up. So I gathered my notebook and pens with one hand while recording him with the other hand.
As I exited, I saw Ryan to my left, having a similar argument with two officers. I recorded him, too, and that angered the officer. As I made my way toward the door, the officers gave me conflicting information.
One instructed me to exit to my left. As I turned left, another officer emerged, blocking my path.
“Go another way,” he said.
As I turned, my backpack, which was slung over one shoulder, began to slip. I said, “Officers, let me just gather my bag.” As I did, one of them said, “Okay, let’s take him.”
Multiple officers grabbed me. I tried to turn my back to them to assist them in arresting me. I dropped the things from my hands.
“My hands are behind my back,” I said. “I’m not resisting. I’m not resisting.” At which point one officer said: “You’re resisting. Stop resisting.”
That was when I was most afraid — more afraid than of the tear gas and rubber bullets.
As they took me into custody, the officers slammed me into a soda machine, at one point setting off the Coke dispenser. They put plastic cuffs on me, then they led me out the door.
I could see Ryan still talking to an officer. I said: “Ryan, tweet that they’re arresting me, tweet that they’re arresting me.”
He didn’t have an opportunity, because he was arrested as well.
The officers led us outside to a police van. Inside, there was a large man sitting on the floor between the two benches. He began screaming: “I can’t breathe! Call a paramedic! Call a paramedic!”
Ryan and I asked the officers if they intended to help the man. They said he was fine. The screaming went on for the 10 to 15 minutes we stood outside the van.
“I’m going to die!” he screamed. “I’m going to die! I can’t breathe! I’m going to die!”
Eventually a police car arrived. A woman — with a collar identifying her as a member of the clergy — sat in the back. Ryan and I crammed in next to her, and we took the three-minute ride to the Ferguson Police Department. The woman sang hymns throughout the ride.

Clearly the officer was, like Darren Wilson, doing an awards-worthy job.

And now with one of those hymns sung in the police car — Pink Martini and Storm Large.