The Best of All Possible World Orders

Given the multiplying foreign policy emergencies in the headlines, from the advance of the Islamic State in Iraq and Syria (ISIS) to the face-off between Russia and Ukraine, the subject of Henry Kissinger’s new book, “World Order,” could not be more timely. However the reader may regard the author’s own historical baggage, the book puts the problems of today’s world and America’s role in that increasingly interconnected and increasingly riven world into useful — and often illuminating — context.

Yes, Context is All. How is America to continue its murderous domination of the planet

with all these pesky upstarts getting in its way? Mr. Kissinger, now 91, strides briskly from century to century, continent to continent, examining the alliances and divisions that have defined Europe over the centuries, the fallout from the disintegration of nation-states like Syria and Iraq, and China’s developing relationship with the rest of Asia and the West. At its best, his writing functions like a powerful zoom lens, opening out to give us a panoramic appreciation of larger historical trends and patterns, then zeroing in on small details and anecdotes that vividly illustrate his theories.

This book is less concerned than Mr. Kissinger’s earlier ones — including “Diplomacy” (1994), which this volume draws upon heavily at times — with spinning or with rationalizing his own policy-making record as national security adviser and secretary of state under President Richard M. Nixon. Still, there are troubling passages: the handful of pages dealing with Vietnam, for instance, will remind many readers of Mr. Kissinger’s disingenuousness on that subject. Once again, he sidesteps questions about decisions that he and Mr. Nixon made that prolonged and expanded the war, as well as their devastating consequences.

As for Mr. Kissinger’s descriptions of prominent acquaintances or colleagues, they tend toward the anodyne or ingratiating. He doesn’t provide a plausible explanation for why he supported the invasion of Iraq, a position that weirdly aligned him more with Wilsonian neo-conservatives eager to export democracy than with realists like his former associate Brent Scowcroft, who presciently warned of the dangers of implementing regime change in Iraq. Instead, Mr. Kissinger talks vaguely about his respect and affection for President George W. Bush, praising him for guiding the country “with courage, dignity and conviction in an unsteady time.”

Mr. Kissinger also plays down his role as an informal, outside adviser to the George W. Bush White House. (In his 2006 book, “State of Denial,” Bob Woodward wrote that Mr. Kissinger had “a powerful, largely invisible influence” on that administration’s foreign policy, and met regularly with Vice President Dick Cheney.) In a 2005 essay, Mr. Kissinger wrote that “victory over the insurgency is the only meaningful exit strategy” for the United States in Iraq; in this book, he writes that seeking to implement American values “by military occupation in a part of the world where they had no historical roots” proved “beyond what the American public would support and what Iraqi society could accommodate.” 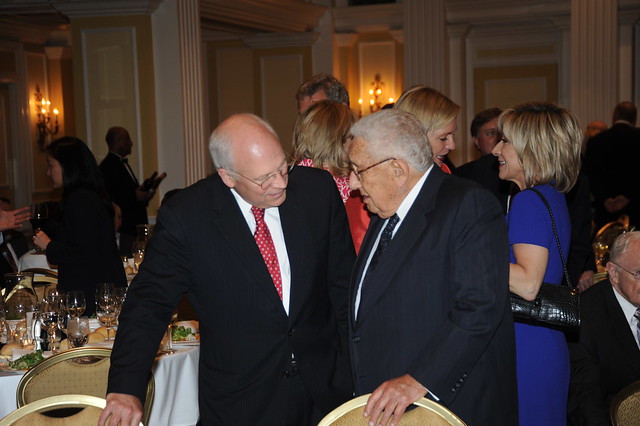 In this book’s most compelling sections, Mr. Kissinger uses his realpolitik lens (with its emphasis on balance of power, linkage and triangular diplomacy) as a revealing prism by which to look at, say, the roots of World War I and the sources of conflict in the modern Middle East. He similarly uses his knowledge of various countries’ historical proclivities and their self-image over the centuries as a frame of reference for current developments like the Arab Spring and America’s increasingly ambivalent role on the world stage.
Mr. Kissinger’s sketches of historical figures like Talleyrand and Cardinal Richelieu remind us of his gifts as a portraitist while fleshing out his belief in the ability of great leaders to sway — or at least moderate — the course of history.

He also provides a succinct summary of his long-held views on the destabilizing dangers of revolution: The French Revolution, he writes, “demonstrated how internal changes within societies are able to shake the international equilibrium more profoundly than aggression from abroad,” a lesson underscored by the upheavals of the 20th century, from Russia to Iran.

Known in the Nixon White House for his backstage maneuvering, Mr. Kissinger delivers some shrewd analysis here of the role that psychology can play (both in the case of individual leaders and entire countries) in foreign policy. He writes as well about how patterns of history often repeat themselves. For instance, of Russia, he asserts that “it has started more wars than any other contemporary major power, but it has also thwarted dominion of Europe by a single power,” holding fast against both Napoleon and Hitler; at the same time, he notes, it has undergone tidal rhythms of expansionism that have remained extraordinarily consistent “from Peter the Great to Vladimir Putin.” The model for world order that Mr. Kissinger repeatedly returns to is the so-called Westphalian peace, negotiated in Europe at the end of the Thirty Years’ War of 1618-48 at a time when conditions in Europe, he says, roughly approximated those of the contemporary world: “a multiplicity of political units, none powerful enough to defeat all the others, many adhering to contradictory philosophies and internal practices, in search of neutral rules to regulate their conduct and mitigate conflict.”

Did you say Westphalia?

Old forms of hierarchical deference, he says, were quietly discarded by the dozens of battle-hardened, battle-weary parties (“the delegations, demanding absolute equality, devised a process of entering the sites of negotiations through individual doors, requiring the construction of many entrances”). And a set of straightforward ideas was embraced, most notably the recognition that the state — not the empire, dynasty or religious belief — was “the building block of European order,” and the establishment of state sovereignty (“the right of each signatory to choose its own domestic structure and religious orientation free from intervention”).

The principle of balance of power (ensuring that no country augmented its strength to a point where it threatened to achieve hegemony) became a key to maintaining equilibrium in the Westphalian system, Mr. Kissinger says, even though it would often be “maligned as a system of cynical power manipulation, indifferent to moral claims” (charges that would frequently be made by critics of Mr. Kissinger’s own policy making).

Sometimes, in this volume, Mr. Kissinger assumes the role of history professor. In that sense, “World Order” brings his career full circle, back to the doctoral dissertation about the 19th-century statesmanship of Metternich and Castlereagh that he wrote six decades ago at Harvard and that contained all the seeds of his doctrine of realpolitik, now well known.
As he’s done in earlier writings, Mr. Kissinger argues here that there are two main schools of American foreign policy: the realist school (based on national interests and geostrategic concerns, and exemplified by Theodore Roosevelt) and the idealist school (based on a sense of moral mission, and exemplified by Woodrow Wilson).

Mr. Kissinger, renowned as a practitioner of realpolitik, often sounds as if he were mouthing platitudes when he tries to articulate the importance of the idealistic strain in American diplomacy. (“There is a special character to a nation that proclaims as war aims not only to punish its enemies but to improve the lives of their people.”) He is way more persuasive when dissecting the dangers of the Wilsonian urge to “base world order on the compatibility of domestic institutions reflecting the American example” and the perils of failing to analyze “the cultural and geopolitical configuration of other regions and the dedication and resourcefulness of adversaries opposing American interests and values.”

When efforts to export democratic American ideas of order have fallen short, Mr. Kissinger argues, the country has frequently responded by abruptly retreating, resulting in a pattern that has risked “extremes of overextension and disillusioned withdrawal.” Three times in two generations — in Vietnam, Iraq and Afghanistan — he adds, “the United States abandoned wars midstream as inadequately transformative or as misconceived.” With the volatility of the world today, he writes, it is crucial for the United States to stay engaged on the world stage as a “balancer” in places like the Middle East and Asia, especially at a time when Europe seems to be turning inward.

There has always been a dark, almost Spenglerian cast to Mr. Kissinger’s thinking, and he sees ominous signs today of a descent back into a Hobbesian state of nature — in the bedlam overtaking Syria and Iraq, where “no common rules other than the law of superior force” seem to hold; in the spread of weapons of mass destruction and “the persistence of genocidal practices”; and in the Wild West of cyberspace, which has “revolutionized vulnerabilities.”
In fact, he says, we are “insistently, at times almost desperately, in pursuit of a concept of world order,” at this moment in history when “chaos threatens side by side with unprecedented interdependence.”
WORLD ORDER
By Henry Kissinger
420 pages. The Penguin Press. $36.

Sing us out Lenny