The Whip and The Body Politic The history of the cinema is pockmarked with works that while aesthetically admirable are morally reprehensible. Whiplash most certainly numbers among them. Make no mistake. For while Damien Chazelle’s drama about a sadistic jazz instructor (J.K. Simmons) and his all-too-willing student/victim (Miles Teller) doesn’t reach the levels of either egregiousness or artistry of The Birth of a Nation or Triumph of the Will, it’s worthy of comment and reprobation nonetheless; particularly in today’s movie marketplace. For Whiplash traffics not in 3-D raccoons, but three-dimensional human beings. It’s a small-scale drama of the sort that used to be more common in the “indie” arena. And that’s all the worse for it in light of the missed opportunity it represents in light of the current state of cinema.
Set at a jazz music conservatory in Manhattan Whiplash supplies us upfront with sufficient information about one of its two main characters, but very little about the other. Andrew (Teller) is determined to be a successful jazz drummer. His idol is Buddy Rich — a drummer whose fame as a musician is as nothing compared with his infamy as an abusive loudmouth.

Andrew is convinced that Fletcher will make him a success. So much so that very early on in the proceedings he unceremoniously “drops” Nicole, a very attractive and sympathetic young woman he’s been seeing (Melissa Benoist) in anticipation of the fact his drum classes will inevitably push her out of his life. That this pre-emptive elimination won’t be enough is made clear from the very first scenes of Fletcher’s classes, where we see the teacher in a series of lightning-round eliminations play Andrew’s skill off against that of two other potential drummers for the band he’s putting together. “Are you rushing the beat or are you retarding the beat?” is the question he asks relentlessly. Those who can’t answer are shown the door. But things are no better for those that stay. Andrew find himself subject to a cascade of homophobic slurs from a teacher who clearly sees verbal and sometimes physical abuse (he’s not above slapping Andrew when he doesn’t get what he wants from him) as central to his musical methodology. Some may find this to their moviegoing taste. Me, I prefer Christopher Lee and Dahlia Lavi under the direction of the great Mario Bava.

Abuse as a ‘teaching tool” is no new thing. In fact be it music, dance or drama it’s been utilized by “geniuses” over and over again. In his memoir Original Story By, Arthur Laurents recalls of how during rehearsal for West Side Story director/choreographer Jerome Robbins rained scorn on the show’s male lead Larry Kert, claiming he was acting “like a faggot.” Larry Kert was gay. So was Jerome Robbins. So were the shows other creators, Laurents (book), Leonard Bernstein (music) and Stephen Sondheim (lyrics.) But times, and Broadway, being what they were , and “Gay Liberation” a decade away, no one came to Kert’s defense. He survived the attack and continued on in the show – even after Robbins stole his then-boyfriend from him. Nothing so spectacular happens in Whiplash. But one is left wondering about Fletcher’s verbal homophobia and what lies behind it. We know nothing about his personal life. All that we’re vouchsafed is his professional one. And even there we’re given nothing but his words to go by until the film’s last act.

Fletcher is fond of recounting the supposedly “true story” of how drummer Jo Jones changed the course of jazz history when frustrated with the allegedly substandard work of a young musician named Charlie Parker threw a cymbal at his head. According to said “legend” this act of thoroughly unprofessional violence unleashed Parker’s genius. Here Forrest Wickman helpfully exposes the truth behind this fairy tale (pun intended) that Chazaelle so adores. 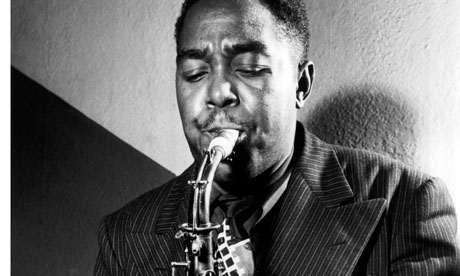 Fletcher presumably longs to do to Andrew what Jones allegedly did to Parker. He also quite clearly wants to fuck him — but Chazelle chokes on explicating that screamingly obvious fact. Instead we get a “backstory” as Andrew learns Fletcher has abused pupils in the past with in one instance far from copasetic results . As Fletcher tells it the student in question was killed in an accident. But as Andrew learns from the conservatory’s head official the student killed himself. Andrew is encouraged to recount his own hostile encounters with Fletcher the better have him dismissed. He does so, and the teacher is shown the conservatory’s door. But that’s not the end of the story, for Fletcher goes on to lead another jazz ensemble, unconnected with the conservatory, and Andrew, at Fletcher’s urging, joins it. Making an already melodramatic situation stretch credulity to the breaking point, Fletcher confronts Andrew in mid-performance on the big night of the show and tells him he knows that he was responsible for getting him fired. Andrew “answers” with an extended drum solo that impresses Fletcher and supposedly us as well. But what price “unleashed genius’? It’s just a big showy drum solo – not high watermark of musical creativity, And what is Andrew, after all he’s been through with Fletcher, trying to prove?

In his previous feature Guy and Madeline on a Park Bench (2009) Chazelle fashioned a light-spirited musical comedy set against the world of jazz in which a musician (Jason Palmer) and a singer (Desiree Garcia) come together and break apart in a “nobody’s fault” scenario of great liveliness and charm. Whiplash is utterly devoid of liveliness charm, hostility and brutality hog center stage. While the pleasures of Guy and Madeline are obvious one is left to wonder precisely what point Chazelle was trying to prove with Whiplash. That he’s the new Buddy Rich? Not an honor of any sort.
And now, with a song about Truth, Lies and Bad Behavior, one of Buddy Rich’s very greatest enemies.