Surely the facts are DE-LOVELY!

PARIS — For more than four decades, Hollywood insiders, financiers and dreamers have been obsessed by the quest to recover “The Other Side of the Wind,” the unfinished last film of Orson Welles. Cinema buffs consider it the most famous movie never released, an epic work by one of the great filmmakers.
Endless legal battles among the rights holders, including Welles’s daughter, kept the 1,083 reels of negatives inside a warehouse in a gritty suburb of Paris despite numerous efforts to complete the film — a movie within a movie about the comeback attempt of an aging, maverick director played by John Huston.
The quest may be over. A Los Angeles production company, Royal Road Entertainment, said on Tuesday that it had reached an agreement with the sometimes-warring parties to buy the rights. The producers say they aim to have it ready for a screening in time for May 6, the 100th anniversary of Welles’s birth, and to promote its distribution at the American Film Market in Santa Monica, Calif., next month.

It is the latest event in a saga marked by legal squabbles, clashing egos, the spiriting away of a working print and, briefly, the disappearance and recovery of the reels last summer after a storage company went bankrupt.
“This is like finding the Land of Oz or some lost tomb,” said Josh Karp, the author of a book about the movie to be published next year by St. Martin’s Press. “This film is art imitating life and life imitating art. It’s become so mythical because of what happened with all the failures to finish it and the players involved.”
Royal Road, which has produced several foreign independent movies, spent five years chasing after the rights. It had to negotiate a détente among the rights holders: Welles’s longtime companion and collaborator, Oja Kodar; his daughter and sole heir, Beatrice Welles; and an Iranian-French production company, L’Astrophore.

Which was also responsible for THIS late-period Welles masterpiece:

During the last 15 years of his life, Welles, who died in 1985, worked obsessively on the film, which chronicles a temperamental film director — much like him — who is battling with the Hollywood establishment to finish an iconoclastic work. The supporting cast included Susan Strasberg, Lilli Palmer, Dennis Hopper and Peter Bogdanovich, who basically played himself, a young up-and-coming director.

Here’s a excerpt from The Lost Films of Orson Welles in which Bogdanovich discusses the film. A clip from the AFI tribute, with a clip form TOSOTW that he screened there is also featured.

Voyeurism was a considerable sexual interest of Welles in his later years. F For Fake evokes it playfully The Big Brass Ring less so. The Other Side of the Wind had something very serious in mind in its sex scenes (a fragment of which used to be available on You Tube ) it’s directly related to the principle character conflicts. The Other Side of the Wind may have been initially inspired by Welles’ encounter with Hemingway but it also evokes John Ford — whose closeted gayness was discussed quite straightforwardly by Maureen O’Hara in her memoirs.

While not probably gay himself, Welles was a humungous Fag-Hag. He was fascinated by gay men ever since his first acting gigs for Michael MacLiammoir at the Abbey Theater — who went on to play Iago so memorably for Welles in Othello. Other Gays of import to him include Marc Blitzstein (whose The Cradle Will Rock he directed), Francois Reichenbach (see F For Fake) and of course Elmyr (ditto) 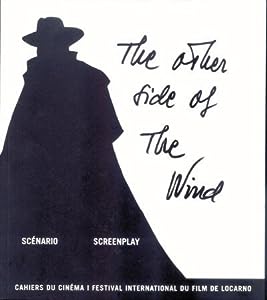 Welles financed the movie by taking on television roles and by tapping investors. One of them was Mehdi Bushehri, brother-in-law of the shah of Iran and an investor in Astrophore. He later clashed with Welles over spending and took control of the negative reels in France, which is why they remained in the suburban Paris warehouse.
Welles left behind a roughly 45-minute edited work print. Mysteriously, he managed to smuggle it out of Paris in 1975 in a van and he shipped it to California. Ms. Kodar said she has it now in Primosten, on the Adriatic coast in Croatia, where she lives.
“I am going to sign the contract,” Ms. Kodar, 73, said in a telephone interview from there on Tuesday. “The catalyst is the hundred-year anniversary and everybody is moving in a kind of wave. When I finally see it on the screen, then I will tell you that the film is done.”
For decades, others tried to acquire rights to complete the film, including Mr. Bogdanovich, Showtime and Gary Graver, the director’s final cinematographer. But those efforts failed because they were unable to strike a common deal among the rights holders, who favored different approaches to the finished product. French laws protecting artists’ rights gave Beatrice Welles — as the direct descendant — sole legal control over the reels. She had blocked their removal from storage.
“It’s hard to say why it’s coming together now except that everybody realizes that the longer we wait the less people will be around to know Orson’s wishes,” said Frank Marshall, 68, who was a line producer on “The Other Side of the Wind.” “Everybody recognizes that it’s the last chance.” Mr. Marshall — who was also a producer for Steven Spielberg — tried for years with Mr. Bogdanovich to get the picture completed.
In 2012, Mr. Marshall joined with Filip Jan Rymsza, of Royal Road, to approach Ms. Welles in Sedona, Ariz., and Ms. Kodar, who also acted in the film.
“They figured out a way to get everybody involved,” said Mr. Karp, the author. “Their effort is incredible. The last few years of this have been so fraught with so many deals that didn’t happen because people screwed up in the last minute.”
Ms. Welles, who manages the Welles estate, said a visit by Mr. Rymsza and Mr. Marshall was the key.
“It took the right people to come along,” she said. “They wanted to talk to me and did not want any outsiders. Until now this movie has been under lock and key under French law. I had the good fortune to be able to protect it. When we talked, we laughed and joked. It was just this amazing rapport. What came through to me was their true love of art.”
In the middle of this month, Mr. Rymsza saw the reels for the first time, marked in neat handwriting with the name of the film. “I was relieved to see it was in such good condition — no mold or any degradation and the materials were in their original boxes,” he said.
Mr. Rymsza, 38, said he was being backed by a private equity investor whom he declined to name. The Americas Film Conservancy, a nonprofit organization, also helped finance the effort to locate the reels, he said.
With the signing of the agreement, the next step is to ship the reels to Los Angeles, where veterans from the original project will carry on the next phase.
“We will set up a cutting room and Peter Bogdanovich and I will assemble the film,” Mr. Marshall said. “We have notes from Orson Welles. We have scenes that weren’t quite finished, and we need to add music. We will get it done. The good news is that it won’t take so long because of all of the technology today.”
Mr. Marshall and other participants in the film, like Mr. Bogdanovich, savor the memories of Welles’s low budget, guerrilla style, shooting available actors from Arizona to Spain.
They filmed in color and black and white and in 35 millimeter, 16 millimeter and Super 8 formats. The young crew would sneak into a movie lot or a California drive-in, posing as university film students if anyone demanded production permits, Mr. Marshall recalled. He said he often invoked the famous Welles name to requisition props like a human skeleton or a Porsche. Welles supplied his own Oscar statuette, won for “Citizen Kane,” for his main character to brandish on film.

And Oja to be sure has even more in her archives.

IOW, Orson Welles, dead for some 29 years is more alive than ever.

Take it away Ethel