The lesbian daughter of one of this country’s noted mass-murderers (she’s on the left, her wife Heather Poe is on the right) 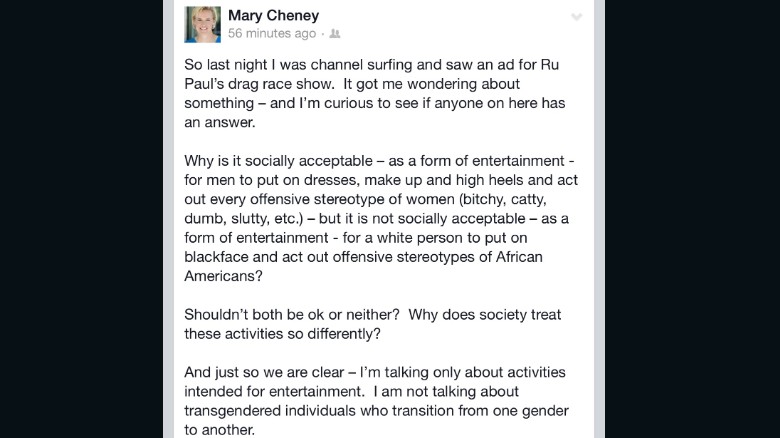 “Shouldn’t both be ok or neither?” Cheney wondered.
Cheney, who is openly gay and married, emphasized that she was not drawing any comparisons between white people painting their faces black and transgender individuals, only men who entertain in drag. Cheney said the question was sparked after seeing an ad on TV for the upcoming season of Logo’s RuPaul’s Drag Race.

Ru’s face s already black, dear. And he’s not Eddie Cantor (though I’m sure he adores this number)

Asked via Facebook message whether she’d like to clarify her comments, Cheney gave a brief response: “Seriously?”
It’s not the first time Cheney has taken her views to Facebook.
Cheney took to Facebook in Nov. 2013 after her sister Liz, who was campaigning for Senate in the Wyoming GOP primary, reaffirmed her opposition to same-sex marriage. Daddy’s been trying to pimp Liz for High Office for years.

Hey, now that Mitten isn’t running maybe Liz can take a whack at the POTUS race. And speaking of Drag Queens, maybe you could run as Lindsay Graham’s veep. He needs a Strong Woman behind him — don’t you think?

“Liz — this isn’t just an issue on which we disagree — you’re just wrong — and on the wrong side of history,” Cheney [Mary] wrote then on Facebook.

Mary, there’s more than one form of drag you know. Take for example this famed Male Impersonator.

whose socio-political impact is discussed HERE.

Mary Cheney, it should never be forgotten — even in The United States of Amnesia (as Eugene so appropriately called it) was once hired by Coors Beer

to win back the gay and lesbian market that had been lost in One of The Most Successful Product Boycotts in American History, engineered in response to the company’s rank, blatant homophobia. This required Mary to, among other things, attend the Mr. Leather Contest.

I don’t recall her raising any objections to THOSE outfits.

As for what you’re up to now, Mary — Marlene sings it best