Surely the facts are . . . malleable

Returning to the airwaves after the funerals of two murdered NYPD officers, the leader of one of the city’s most influential police unions said that Mayor Bill de Blasio needs to humble himself to heal the glaring rift between cops and City Hall.

OH yes he’s got to Humble Himself, because he’s Just Too UPPITY! 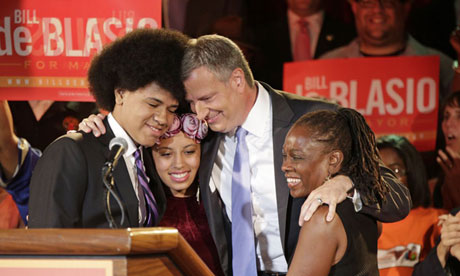 Edward Mullins, the president of the Sergeants Benevolent Association, said a meeting between Mr. de Blasio and the city’s police unions broke down last week because the Democratic mayor would not denounce his ally, Council Speaker Melissa Mark-Viverito,

for wearing an “I can’t breathe” shirt, a symbol of the movement to reform police practices.

Mr. Mullins also insisted Mr. de Blasio further angered cops when he reappointed a Brooklyn criminal court judge who set no bail for a teenager accused of threatening police.
“The mayor had a golden opportunity last week,” Mr. Mullins told radio host Joe Piscopo on AM 970 The Answer. “The City Council speaker, who was wearing a ‘I can’t breathe’ t-shirt, he was asked if he would denounce her actions of doing that and the sit down that they had at the City Council and he defended it with, ‘They have a First Amendment right.’ She’s not his puppet and she felt very strongly about the grand jury decision.”
“What he did was reason her actions. But the question was, ‘Would you denounce her actions?’ And he didn’t answer that,” Mr. Mullins added.

Will Mullins denounce THIS?

Yeah right. For as we all know –

I’m sure Mullins regard this blog as a “terroristic threat” for its criticism of the murderous fascism of the NYPD — an organization of corrupt criminals whose salaries those they attack are forced to pay for in taxes.

“The mayor needs to be humble. He needs to realize that his philosophical view of coming into the role of mayor of New York, [his] personal view is not the view of all eight million people,” Mr. Mullins charged. “And he needs to tone that in a different way, channel it in a different way with some type of an apology.”

IOW he should take his cue from Uriah Heep. “‘When I was quite a young boy,’ said Uriah, ‘I got to know what umbleness did, and I took to it. I ate umble pie with an appetite. I stopped at the umble point of my learning, and says I, “Hard hard!” When you offered to teach me Latin, I knew better. “People like to be above you,” says father, “keep yourself down.” I am very umble to the present moment, Master Copperfield, but I’ve got a little power!’”

And Mullins has a LOT of power.

Mr. Mullins said that Mr. de Blasio—who has infuriated cop unions leaders for supporting anti-police brutality protests, attempting to reform the NYPD and explaining to the public that he has warned his biracial son about interacting with police—must understand that his rhetoric is being perceived as anti-police. Mr. Mullins’ union and the Patrolmen’s Benevolent Association are also locked in contract negotiations with City Hall.
“His actions need to demonstrate his belief that he is a supporter of the police and not just through words,” he said.
Mr. de Blasio’s office did not immediately return a request for comment.

So let’s have a cheerfully “humble” send -off, shall we?