There has been so much blather of late about Chris Kyle is in fact a remake of another film

It was the video that put WikiLeaks on the map: “Collateral Murder” turned the tide of war in Iraq and landed Private first class Bradley Manning in military detention. Bradley is now Chelsea as in need of medical attention for her transition. Will be able to get it in a military prison ? I doubt it.

But for Army veteran Ethan McCord, it was just another day on duty. The helicopters were approximately a mile and a half away and they were zooming in on these guys,” McCord recalls to RT’s Meghan Lopez. “And looking at it now you obviously can’t see anything.”

The whistleblower website released the video on April 5, 2010, and instantly made international headlines by exposing what the War in Iraq really meant to some. The clip in question, taken from camera affixed to an Apache helicopter flown by US troops, showed Americans opening fire on civilians and journalists.

“That right there is obviously a camera dangling if you really pay attention,” McCord says of one person caught on film. “That guy has an AK-47 right there,” of another.

McCord was patrolling a volatile part of Baghdad on July 12, 2007 with the 216th Battalion when his colleagues started shooting. “I was about five blocks away, four or five blocks away to the left of the screen… this was a battalion wide mission,” he recalls.

Upon the sound of heavy gunfire, McCord and his infantry squad began running towards the scene to provide support. Once again, though, the Apache unloaded. By the time McCord arrived, the helicopter guns were quiet and most of those on the scene were dead.

“One guy’s head was off, the top of his head was completely off and his brains were on the ground and the smell, the smell still haunts me every day. I don’t know how to describe it,” he says.

Then when McCord approached a van targeted by the airstrike, he heard a noise he wasn’t expecting: the cry of a little girl.

“I think she was four years old and you could tell she had a wound to the stomach and I remember her looking at me and the blood around her eyes made her eyes so ghostly,” he says.

McCord grabbed the girl and ran her into a nearby building. There he picked the glass out of her eyes so she could blink and handed her off to a medic.

“I went back outside and we were told to take pictures and so I started taking pictures of the van,” he says.

Then he discovered another child.
“That’s me right there,” McCord tells Lopez as he walks her through the now infamous “Collateral Murder” clip. “That is a little boy that I originally thought was dead.”

Despite their injuries, the children survived. Part of Ethan McCord, though, changed forever.

“I couldn’t stop myself from crying,” he says.

McCord sought out mental health afterward, and says he was mocked by his commanders and threatened with expulsion from the military.
“And that’s when I started drinking,” he says. “And the mental health [doctor] had given me prescriptions: 13 prescriptions.”

Things got worse, though, and McCord began imagining the worse. Routine daydreams turned to fantasies about killing own children and everyone around him. In response, he tried to end his life.

“I had already begun drinking pretty heavily and I downed all of the pills and I drank a fifth of Crown Royal at 10 o’clock in the morning and my wife at the time found me and called the ambulance,” he says.

After trying to take his own life, McCord was dismissed from the military. “Kicked out with no disability, no benefits from the Army whatsoever,” he says.

Then McCord moved to Wichita, Kansas and attempted suicide again.

“I don’t know if I really want to talk about it. It was really bad.”

Ethan McCord’s story is tragic, but he is not alone. Thousands of veterans suffer from the effects of Post-Traumatic Stress Disorder (PTSD). For those who can’t handle the stress, many have taken their own lives. They were fathers and brothers, soldiers and sons, and now they are just another casualty in American wars abroad. In the past two years alone, McCord has lost eight of his veteran brothers to suicide — and his own outlook on life hasn’t exactly improved either.

“I know that I will never, ever, ever get better,” he says. “I will never get over this.”

For the world, the “Collateral Murder” video was another black mark on an unpopular war. For Ethan McCord, though, it was a catalyst that made him question the entire purpose of the war.

“You know America, we were John Wayne, we were wearing the white hat. Americans were always trying to help people, that’s what we do, we try to spread freedom and democracy,” he says. “With the barrel of a gun.”
History will be the ultimate determinant for how the Iraq War is viewed, but for Ethan McCord and so many soldiers suffering from post-war stress, the future is far and the past is too much to cope with.

Wikileaks is the toy of one Julian Assange 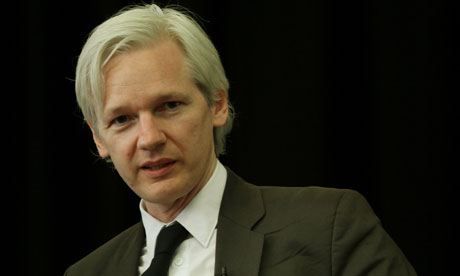 memorable portrayed by (needless to say) Benedict Cumberbatch in a film by Bill Condon far too few people saw.

Assange, wanted in Sweden on rape charges, has been comfortably residing for the last few years in the Ecuadorean embassy in London.
Chelsea Manning who he so cleverly exploited enjoys no such comforts.