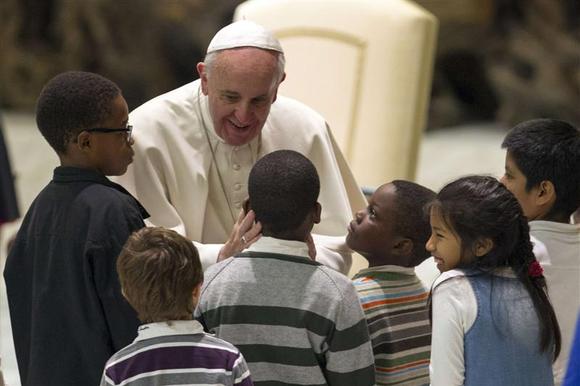 Could this be Michael Jackson Redux?

Pope Francis faced criticism from child protection groups this week when he told parents that it is fine to spank their children as punishment for bad behavior.
Speaking in front of thousands of people on Wednesday at his weekly general audience, Francis described the responsibilities of fatherhood and the qualities of a good father. According to The Associated Press, he recalled a conversation he had with a father who had told him: “At times I have to smack my children a bit, but never in the face so as not to humiliate them. How beautiful,” said Francis. “He had a sense of dignity. He has to punish them but does it justly and then moves on.”

Because an ass-whipping is never humiliating. Right?
I doubt that Catherine Robbe-Grillet would agree.

Many have condemned this apparent endorsement of corporal punishment. “It is disappointing that anyone with that sort of influence would make such a comment,” Peter Newell from the Global Alliance to end Corporal Punishment of Children told The Telegraph.
But the Rev Thomas Rosica, who collaborates with the Vatican press office, told AP that the Pope was not speaking about committing violence against a child but rather “helping someone to grow and mature.”

And there’s nothing like physical violence to help a child grow and mature. I’m sure the Pope will discuss this further when he addresses Congress.

I’m sure he adores the new Lego Movie.

And speaking of humiliation Pope “Who am I to Judge?” is an expert when it comes to that.