Well you’re not going to get them from Marco

MIAMI — Sen. Marco Rubio (R-Fla.), a son of Cuban immigrants who is serving just his fourth year in the Senate, launched his presidential campaign Monday night by declaring himself the leader best suited to steer the country into what he called “the new American century.”
He scorned former secretary of state Hillary Rodham Clinton, who launched her Democratic presidential campaign Sunday, as “a leader from yesterday” who is “promising to take us back to yesterday.”
“Yesterday is over. We are never going back,” Rubio told a supportive crowd at the iconic Freedom Tower, a personally resonant landmark where the federal government once processed Cuban immigrants fleeing Fidel Castro’s regime.

Actually he DOES want to go back.

With his young family by his side, Rubio, 43, cast himself as a youthful, insurgent alternative to Clinton, 67, and former Florida governor Jeb Bush, 62, a close friend and mentor of Rubio’s who is also preparing to run for president — though he did not mention either political rival by name.

So which of the kids are LGBT?

“Before us now is the opportunity to author the greatest chapter yet in the amazing story of America,” he told hundreds of supporters packed inside the tower. “We can’t do that by going back to the leaders and ideas of the past. We must change the decisions we are making by changing the people who are making them.”

“In many countries, the highest office in the land is reserved for the rich and powerful,” he added later. “But I live in an exceptional country where even the son of a bartender and a maid can have the same dreams and the same future as those who come from power and privilege.”

Rubio’s strategy mirrors his successful push for the Senate in 2010, when he came from far behind to win a divisive GOP primary and a three-way general-election race with the backing of tea-party-inspired voters. In the year ahead, he faces tall odds similar to those he overcame when he ran at age 26 for local office and later for the state legislature — as well as a bruising battle with Bush, who is raising tens of millions of dollars and leads Rubio in polls in Florida and in early-voting primary and caucus states.
Undeterred by months of pressure to skip a run this time, Rubio pressed ahead on Monday: “I have heard some suggest that I should step aside and wait my turn. But I cannot. Because I believe our very identity as an exceptional nation is at stake and that I can make a difference as president.”

Monday’s announcement was expected to help vault Rubio into the top tier of Republican contenders. In recent weeks, Rubio has done little campaigning and has avoided joining the early fray, focusing instead on holding a handful of discreet fundraisers in New York, California, Texas, Illinois and Washington, D.C., while consulting his family and close circle of advisers ahead of the formal launch.
In the immediate future, Rubio plans to attend to his Senate duties: On Tuesday, he’ll return to Capitol Hill for a Senate Foreign Relations Committee hearing to review legislation that would impose stiffer sanctions on Iran, and on Wednesday he is scheduled to attend a tax-reform event. But he’ll be on the campaign trail Thursday, stopping in New York and Boston for fundraisers before visiting New Hampshire on Friday.
In the coming weeks, aides said, he expects to also visit Iowa, where his previous support for bipartisan immigration reform makes him a less-popular choice; and South Carolina, a state where he enjoys broader support and that is home to many of his top advisers. Donors said Monday that he is also planning to visit Texas soon. 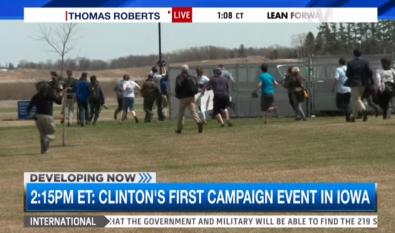 Like Ted Cruz and Rand Paul, who have also declared their 2016 bids, Rubio is a first-term senator and part of a new generation of tea-party-backed lawmakers who came to Congress in recent years. On Monday, Cruz welcomed Rubio to the presidential race, saying, “We’re both the sons of immigrants who escaped Cuba to build a better life in the United States.”

And all Spanish — right?

Rubio’s announcement resonated with elderly Cuban Americans who attended Monday night’s event, some donning military gear they first wore as part of operations to overthrow the Castro regime in the 1960s.
“There’s incredible pride that us home-grown, lower-class people have been able to produce the kind of man that this guy is,” said Frank Carrillo, 65, a local lawyer. In English and Spanish, he called Rubio “un muchacho super-bright” — “a super-bright man.”

And an exceptionally thirsty one.

Rubio enters the race with a clear financial disadvantage. Bush has been traveling the country collecting tens of millions from top-dollar donors in anticipation of his own campaign. Rubio hopes to raise at least $50 million by the time the primaries begin next year, according to associates.
Last week, some supporters launched a super PAC, called Conservative Solutions, to back his campaign. And Rubio has cultivated his own national donor network that includes several wealthy backers, such as veteran GOP financier Wayne Berman and Norman Braman, a Miami-area car dealer who has said he may pledge as much as $10 million to Rubio’s campaign, the new super PAC or both.

On the campaign trail, as he did Monday evening, Rubio is expected to emphasize his emotional personal story to try to spellbind audiences and build his campaign

He was born May, 28, 1971, in Miami. During his political rise, he characterized his parents as exiles forced to leave Cuba after Castro’s communist regime took power.

And longing for a return — which they now can make thanks to President Obama.

Such a lovely place, Cuba.

But in 2011, he had to change his biography on his official Senate Web site after the St. Petersburg Times and The Washington Post reported that his parents, Mario and Oriales Rubio, had actually emigrated more than 2 1/2 years before Castro took power.

Well it was a good story while it lasted.

Rubio said he’d mistakenly relied on family lore, but his explanation fell flat with some critics, who considered it implausible.
His parents struggled to provide for their four children — his father tended bar; his mother worked as a hotel maid and stocked shelves at a department store. In the late 1970s, the family left Miami, looking for better opportunities in Las Vegas.
But the family returned to Miami in the mid-1980s, settling in the heavily Cuban American inland suburb of West Miami. Rubio still lives there with his wife, Jeanette, and their four children.

I don’t envy them.

At age 26, Rubio was elected as a city commissioner in West Miami, his first victory in an undefeated streak that includes a nine-year stint in the Florida legislature and an upset win in the 2010 U.S. Senate race against former governor Charlie Crist. In 2007, Rubio became speaker of the state House, the first Cuban American in Florida history to hold that powerful post; the event was of such great moment in the state that a plane had to be chartered to ferry supporters from Miami to the capital, Tallahassee.
Monday night, he said he regretted that his father was not alive to see him seek even higher office.
“My father stood behind a small portable bar in the back of a room for all of those years, so that tonight I could stand behind this podium in front of this room and this nation,” he said, adding later: “That journey from behind that bar to behind this podium, that’s the essence of the American Dream.”

Mama Cass will sing us out