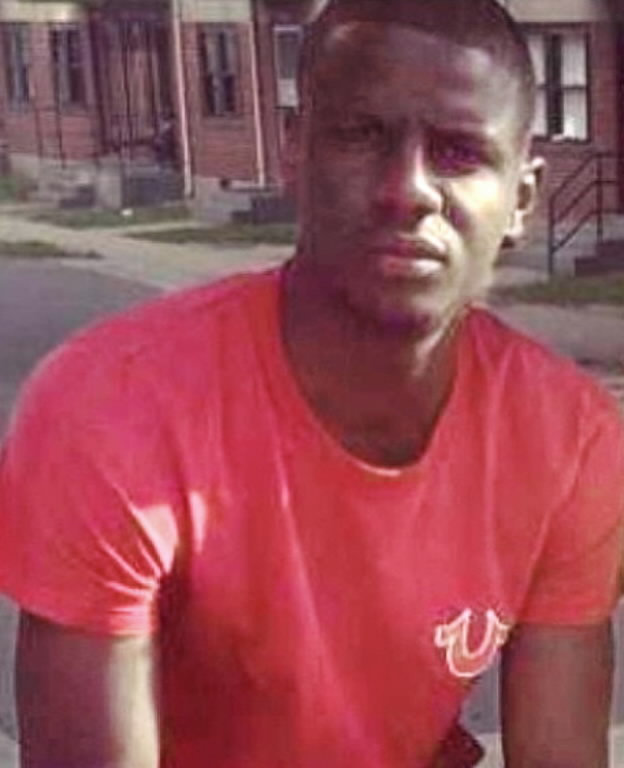 Note: Not “Frederic.” He must be made “familiar” — as if he were a small child. Or a pop star

Or Jeremy Brett’s “Freddie” in My Fair Lady

and Obviously beaten (despite what CNN sez)

Just as with Michael Brown’s murder in Ferguson, the cops have been intent on discrediting the decreased, by releasing his “rap sheet”

Gray, 25, died after spending seven days in a coma as a result of injuries he suffered while in the custody of city police, the Baltimore Sun reports.

He was arrested April 12 by four officers outside a public housing complex. Police said four bicycle officers tried to stop Gray for an unspecified reason and he ran from them. They caught him and detained him while waiting for backup.
It’s not yet known how Gray died. His death has sparked unrest in the city, including protests that turned violent.
A friend told the Baltimore Sun that Gray may have ran from the officers because, “he had a history with that police beating him.”

Details of what led police to try to arrest Gray in April 2015 have not been made public by police. Deputy Police Commissioner Jerry Rodriguez told the Baltimore Sun that details of the arrest remain “a bit vague,” and that the officers patrolling a high-crime area with drug issues believed Gray was “immediately involved or had been recently involved in criminal activity.”

Documents obtained by the Guardian show that he was charged with unlawful possession of a switch blade knife, which was found after he was detained. The documents are not clear about what led to the stop. No other charges are listed.
The Associated Press reports Gray has been in and out of prison on drug convictions since 2008, according to online court records. He was set to start a trial in May on drug charges stemming from a December arrest.
“We had officers in a high-crime area known to have high narcotic incidents,” Rodriguez said, according to the AP. “The officers believe that Mr. Gray was immediately involved or recently involved in criminal activity and decided to make contact.”
Police released a timetable of the events leading up to Gray’s arrest and death. He was seen at about 8:40 a.m. on April 12 on a street northwest of the city’s downtown. The officers approached Gray and he ran. He was caught about two minutes later two blocks away. The officers called for a transport van at about 8:42 p.m. Then, at 8:54 a.m., a block away from where Gray was arrested, the van left for the Western District station “after stopping to place additional restraints on the suspect.” At about 9:24 a.m., an ambulance is called to the Western District station.

Here’s the “rap sheet” of that other “Freddie”

On 24 May 1958 Brett married the actress Anna Massey (daughter of Raymond Massey). Their son, David Huggins, born in 1959, is a British cartoonist, illustrator and novelist. Brett and Massey divorced on 22 November 1962 after she claimed he left her for a man.From 1969 until 1976, Brett was in a romantic relationship with the actor Gary Bond, who died exactly one month after Brett. In the late 1970s, he was involved with actor Paul Shenar.[ In 1976, Brett married Joan Sullivan Wilson, who died of cancer in July 1985.
In the latter part of 1986, Brett exhibited wild mood swings that alarmed his family and friends, who persuaded him to seek diagnosis and treatment for manic depression.Brett was given lithium tablets to fight his manic depression, also known as bipolar disorder. He suspected that he would never be cured, and would have to live with his condition, look for the signs of his disorder, and then deal with it

Brett died on 12 September 1995 at his home in Clapham, London, from heart failure. His heart valves had been scarred by rheumatic fever contracted as a child. He was cremated in September 1995.

So Let’s Do The Freddie

And the Freddie Eynsford-Hill