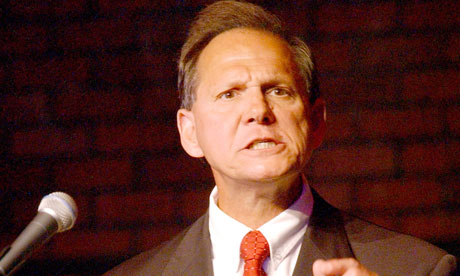 IOW “I’m having my period, so you can’t get married.”

Seven of the nine justices concurred with the order. Only Moore and Supreme Court Justice Greg Shaw did not sign on.
“I am not real clear what it’s saying .. it’s very unclear,” Jefferson County Probate Judge Sherri Friday said. At this moment, they are still issuing licenses to same-sex couples as her attorneys review the order.

It’s pretty clear to me. He’s an anal-retentive asshole and he’s going to delay the inevitable as much as he possibly can no matter how much it costs the state and makes people’s lives miserable. You likely recall the creep from this previous jape.

When Moore’s tenure as circuit judge began, he brought his wooden Ten Commandments plaque with him, hanging it on the walls of his courtroom behind his bench. Moore told the Montgomery Advertiser that his intention in hanging the plaque was to fill up the bare space on the courtroom walls and to indicate the importance of the Ten Commandments. He states that it was not his intention to generate controversy; still, as he told the Atlantic, he understood that the potential for controversy was there, but “I wanted to establish the moral foundation of our law.”
Soon after his appointment, when Moore presided over a case where two male strippers (known professionally as “Silk” and “Satin”) were charged with murdering a drug addict, the attorney for the defendants objected to the display. This drew the attention of critics, who also objected to Moore’s practice of opening court sessions with a prayer beseeching Divine Guidance for jurors in their deliberations. (In at least one instance, Moore asked a clergyman to lead the court’s jury pool in prayer.) Though such pre-session prayers were not uncommon in Alabama, having begun many years earlier by George C. Wallace, Jr. when he was a circuit judge, the local branch of the American Civil Liberties Union (ACLU) sent a letter in June 1993 with the threat of a lawsuit if such prayers did not cease.
On June 20, 1994, the ACLU sent a representative to Moore’s courtroom to observe and record the pre-session prayer. Though the organization did not immediately file suit, Moore decried the action as an “act of intimidation” in a post-trial press conference. The incident drew additional attention to Moore just as he was campaigning to hold onto his circuit court seat. In that year’s election, Moore won the seat in a landslide victory over local attorney Keith Pitts, who had unsuccessfully prosecuted the “Silk and Satin” murder case.
In March 1995, the ACLU filed a lawsuit against Moore, claiming that the pre-session prayers and the Ten Commandments display were both unconstitutional. This original lawsuit was eventually dismissed for technical reasons, but Governor Fob James instructed state Attorney General Bill Pryor to file suit in Montgomery County in support of Moore. The case ended up before state Circuit Judge Charles Price, who in 1996 declared the prayers unconstitutional but initially allowed the Ten Commandments plaque to remain on the courtroom walls.
Immediately after the ruling, Moore held a press conference vowing to defy the ruling against pre-session prayers and affirming a religious intent in displaying the plaque. Critics responded by asking Price to reconsider his previous ruling, and the judge issued a new ruling requiring the Ten Commandments plaque to be removed in ten days. Moore appealed Price’s decision and kept the plaque up; ten days later the Alabama Supreme Court issued a temporary stay against the ruling. The Court never ruled in the case, throwing it out for technical reasons in 1998.
On the day that the circuit court ruling was stayed, Moore appeared on the national morning program Today, praising the ruling and vowing to continue his practices. A poll released soon after found that 88 percent of Alabamians supported Moore. Though Moore was later investigated by the state Judicial Ethics Committee regarding the use of money raised by Coral Ridge Ministries in his defense, the investigation eventually ended with no charges being brought.

(returning to the outrage at hand)

Part of the order, Friday said, states part of the Alabama Supreme Court’s order today that’s confusing is that the court has “invited” parties to submit motions addressing the U.S. Supreme Court’s ruling on the Alabama Supreme Court’s ruling in the Alabama Policy Institute case.
The order stems another issued by the state supreme court in March.
“As it has done for approximately two centuries, Alabama law allows for ‘marriage’ between only one man and one woman,” the order issued in March stated. “Alabama probate judges have a ministerial duty not to issue any marriage license contrary to this law. Nothing in the United States Constitution alters or overrides this duty.”
That order, called a writ of mandamus, had been requested by the Alabama Policy Institute and the Alabama Citizens Action Program in February.

So now that the “Invitations” have been issued those “invited” have 25 days to explain why Alabama is not under the jurisdiction of the United States Supreme Court. After that — take it away kids!