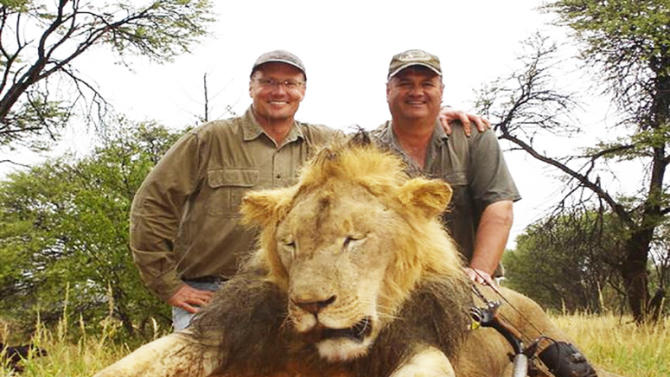 Surely the facts are REVOLTING !

Two Zimbabwean men were expected to appear in court Wednesday over the killing of Cecil the lion, one of Africa’s best known big cats. But most of the attention — and the anger — is focused on Walter Palmer, a dentist from Minnesota whom Zimbabwean authorities say they are seeking for their investigation.
Palmer says he thought everything was above board with the lion hunt he paid to go on earlier this month.
But the lion that he and his local guides hunted down and killed wasn’t just any big cat, according to Zimbabwean officials.
It was Cecil, a beloved resident of Hwange National Park and a major tourist draw for Zimbabwe.
The 13-year-old black mane lion suffered a slow and painful death, according to the Zimbabwe Conservation Task Force.
The hunters lured him out of the park, the conservation group said, and Palmer then shot the lion with a bow and arrow, a method he is known for. But the arrow wasn’t enough to kill Cecil, who survived for another 40 hours until the hunters tracked him down and shot him with a gun.
The big cat was then skinned and beheaded, and the hunters tried to destroy the GPS collar that Cecil was wearing as part of research backed by Oxford University, the group said.
“I had no idea that the lion I took was a known, local favorite, was collared and part of a study until the end of the hunt,” Palmer said in a statement issued Tuesday. “I relied on the expertise of my local professional guides to ensure a legal hunt.”

World-wide cries of outrage, coupled by threats against his life, have sent the dentist into hiding.
And make no mistake I’m far from the first to note that there’s been more upset over the death of Cecil the Lion than there has been over the death of Sandra Bland — who was hunted down by the police as if she were a wild animal whose head was to be mounted on a trophy wall.

One wonders what Peter Beard might have to say about such hunting practices — foreign and domestic. And that’s not to mention Frank Zappa.

But what can one expect from a dentist anyway — right Steve?