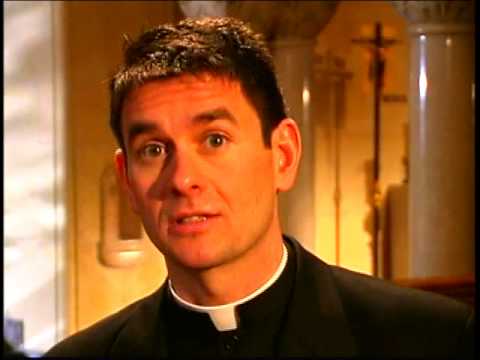 “Bless me Father for I have SINNED !”

At a conference this week urging celibacy for Catholics with “same-sex attractions,” speakers described gay sex as risky and dangerous, and likened it to putting a piece of a bagel into one’s ear.
The Rev. John Riccardo, a priest at a Plymouth parish, made the bagel analogy, which he said is useful in talking to young people. He said junior high students sometimes ask him why God hates gays, and he responds that God doesn’t hate gays but that gay sex is unnatural.
He said he tells students, what if “I just rip open a bagel, I take it, and I cram it in my ear. What would you say?” When they respond, “That doesn’t go there,” he says, “Exactly,” and that doing so “will ruin your ear canal.”

THIS goes in your mouth

If you’re very fortunate so does THIS

As you can see ears are not involved — except if you’re listening to the lovely Mr. Groff sing — which as far as I know doesn’t qualify as a sexual act.

But we all know how Catholic priests are, don’t we?

THIS priest, however regards himself as being. . .MORAL!

Riccardo said he has a family member with a lesbian daughter. She welcomes the daughter and her partner into her home, he said, but she tells them, “When you are here, you will not sleep together … because I think that’s harmful, and here are the reasons why.”

I for one wouldn’t dream of fucking Jesus in the ear.

Detroit Archbishop Allen Vigneron, who delivered the closing Mass Wednesday, said “It’s not being a bigot” to take a stand against same-sex relations. He praised those who are helping gays and lesbians “grow in chaste continence … share in the chastity of Jesus Christ.”
The conference’s message did not go over well with all Catholics. An LGBT-supportive group that protested outside the venue included several members of Fortunate Families Detroit, an organization for Catholics who embrace their LGBT family members without reservation.
“It’s medieval times all over again. … If God created people gay, then gay sex seems to be a natural thing,” Tom Nelson, a member of Fortunate Families Detroit, told the Free Press. The church, he said, “hasn’t come to speed with the 21st century.”

I think I’ve discovered the root of the Good Father’s troubles.