What would Mallarme say?

Clothes, jewelry and political mementos owned by Margaret Thatcher, Britain’s longest-serving prime minister of the 20th century and the country’s only female prime minister to date, are to be auctioned after the Victoria and Albert Museum in London turned down the chance to preserve her wardrobe for the nation.

Does a Nation’s History — to paraphrase the immortal Joe Orton — “teeter on the edge of fashion”? Cue Kay!

The news prompted a firestorm of protest on social media and the airwaves, particularly from members of the Conservative Party, which Baroness Thatcher once led. “Shame the V&A has turned down Thatcher’s personal collection. I for one would have loved to see it!” Britain’s business secretary, Sajid Javid, said on Twitter. Conor Burns, another member of Parliament, denounced the snub on BBC radio, adding that the collection’s breakup would be a “tragedy” and that “her dresses embodied her and a period, and I hope they can be saved.”

What in Hell for?

The despair provoked wry amusement in some quarters. “Is it me, incidentally, or is there something slightly kinky about male Tory MPs who want Lady Thatcher’s clothes put on public display?” mused the historian Robert Harris on Twitter.

Conservative MP drag queens? What would Ru Do?

However, even Dame Vivienne Westwood, the anarchic British fashion designer who mockingly dressed as the baroness for the cover of the society magazine Tatler in 1989, chimed in, adding that she thought that “Lady Thatcher has terrific taste and that it would have been lovely for the V&A to put her dresses on display.”

Can’t quite see her in your fabulous frocks, Viv.

But the museum, like the former prime minister herself, was not for turning.

After Mrs. Thatcher died in 2013, her family offered items ranging from her blue velvet wedding dress and trademark handbags to signed copies of key speeches to the V&A, which has one of the largest fashion collections in the world. It recently has shown exhibitions devoted to Alexander McQueen, famous wedding dresses and the stage outfits of the rock star David Bowie.

Can’t see Bowie in these. 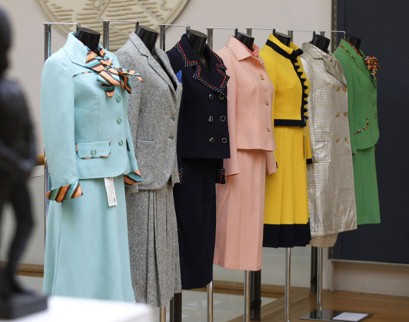 A museum spokeswoman said on Monday that the focus of its clothing collection was items of “outstanding aesthetic or technical quality” rather than those with “intrinsic social historical value,” so it had chosen not to accept the Thatcher collection.
“The V&A has politely declined the offer of Baroness Thatcher’s clothes, feeling that these records of Britain’s political history were best suited to another collection,” she said.
As the furor continued, the museum clarified its statement on Tuesday: “Several years ago, a general discussion took place to explore whether some pieces from the wardrobe of Baroness Thatcher might be added to the V&A’s collection. These conversations did not develop. The V&A would like to make it clear that no formal offer was made for the museum to acquire the collection.”’
Mrs. Thatcher, who once summed up her style as “never flashy, just appropriate,” was renowned for her distinctive sartorial trademarks, from wool suits, pearls and pussy-bow blouses to boxy handbags and bouffant hair. Many saw the so-called “Iron Lady” as a pioneer of consistent power dressing and image manipulation as well as the first female leader of a major Western power.

Christie’s, which has held several previous sales of Thatcher-related lots (including one in 2012 that featured a black leather handbag the former prime minister carried during a 1985 visit to the White House that sold for $38,500), was quick to take advantage of the news. On Tuesday, it announced that it would sell 350 of the Thatcher pieces one by one at an auction on Dec. 15 in London. The sale will take place 25 years after the departure of Baroness Thatcher from office, in the year that would have been her 90th birthday.

Of course, Glenda, you’re quite adept at dealing with tyrants.