Triumph of the Ronald

What with all the chatter about Drumpf’s incipient fascism, and Louis C.K. (of all people) sounding the Hitler Alarm, we would do well to remember that a certain Republican God was “closer than that” to the Third Reich 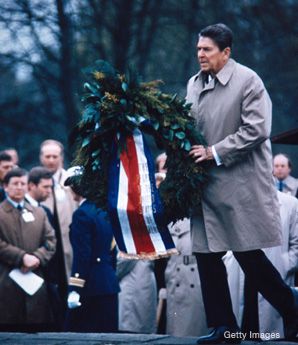 The Bitburg controversy involved a ceremonial visit by U.S. President Ronald Reagan to a German military cemetery in Bitburg, a town in extreme western Germany near the border with Luxembourg, in May 1985, designed to commemorate the end of World War II in Europe 40 years earlier. The visit aroused considerable criticism, both in the United States and around the world, due to the many burial plots at the site dedicated to members of the Waffen-SS – a military arm of the Third Reich’s SS (Schutzstaffel). Waffen-SS, alongside with the entire SS, was judged to be a criminal organisation by the Nuremberg trials. The controversy was compounded by the fact that Reagan did not visit the sites of former Nazi concentration camps. Reagan was scheduled to attend a G7 economic summit in Bonn the week of the 40th anniversary of V-E Day. West German Chancellor Helmut Kohl saw an opportunity to demonstrate the strength of the friendship that existed between (West) Germany and its former foe. During a November 1984 visit to the White House, Kohl appealed to Reagan to join him in symbolizing the reconciliation of their two countries at a German military cemetery. It was suggested that the Kolmeshöhe Cemetery, near Bitburg, was both suitably close and relevant, as 11,000 Americans attached to a nearby airbase lived in harmony with the same number of Germans.

Reagan agreed, and later told an aide he felt he owed Kohl, who despite considerable public and political opposition had stood steadfast with Reagan on the deployment of Pershing II missiles in West Germany. In February 1985, then White House Deputy Chief of Staff Michael Deaver made a planning visit to Bitburg.

At Kolmeshöhe Cemetery, the 32 rows of headstones were covered with snow. Deaver was usually very skillful in carrying out his role as public relations director for Reagan, but this time he and his team failed to noticed that among them were 49 members of the Waffen-SS. A decision was made by the Reagan team not to include a visit to a concentration camp, as had been previously suggested by Kohl. The President said he didn’t want to risk “reawakening the passions of the time” or offend his hosts by visiting a concentration camp.

On April 11, 1985, then White House Press Secretary Larry Speakes informed the media of the planned visit to Bitburg. When asked who was buried at Kolmeshöhe, Speakes said he thought both American and German soldiers were there. Reporters soon discovered that no American servicemen were in the cemetery (in fact, the remains of all U.S. soldiers had long since been removed from German soil) and that Waffen-SS graves were located close to the proposed ceremony. When questioned, Bitburg Mayor Theo Hallet pointed out, all German military cemeteries were likely to contain at least a few SS graves. Such distinctions, though, failed to placate those who were opposed to Reagan’s visit on moral and political grounds. Decorations and memorials on the Waffen-SS graves were removed just prior to Reagan’s visit, and replaced right after.

This planned visit caused a great deal of anger outside of Germany. Many prominent government officials, U.S. Army officers, and celebrities, protested the planned visit. Holocaust survivor and author Elie Wiesel spoke out on the topic at an unrelated White House ceremony, saying, “I… implore you to do something else, to find another way, another site. That place, Mr. President, is not your place.” 53 senators (including 11 Republicans), signed a letter asking the president to cancel, and 257 representatives (including 84 Republicans) signed a letter urging Chancellor Kohl to withdraw the invitation. Former Army S/Sgt. Jim Hively mailed his World War II decorations, including a Silver Star and a Bronze Star, to Reagan in protest. The Ramones recorded the song “My Brain Is Hanging Upside Down (Bonzo Goes to Bitburg),” which alludes to Bedtime for Bonzo, a movie from Reagan’s film career that co-starred a chimpanzee, and Frank Zappa recorded “Reagan at Bitburg”. Robyn Hitchcock’s song “The President” from his album Element of Light also makes reference to the incident.

Chancellor Kohl responded in an interview with The New York Times: “I will not give up the idea. If we don’t go to Bitburg, if we don’t do what we jointly planned, we will deeply offend the feelings of [my] people.” A poll revealed that 72% of West Germans thought the visit should go forward as planned. Kohl admitted that rarely had German-American relations been so strained, and in the days leading up to the visit, the White House and the Chancellery were each blaming the other. The White House claimed that the Germans had given assurances that nothing in the Bitburg visit would be an “embarrassment” for the President: “As clumsily as we handled it, Kohl &. Co. have surpassed us in spades.” A German official said: “The Americans also have a responsibility toward the president. They must also check on the history that is beneath the ground. It was not very intelligent.”

Reagan defended himself by saying:

“These [SS troops] were the villains, as we know, that conducted the persecutions and all. But there are 2,000 graves there, and most of those, the average age is about 18. I think that there’s nothing wrong with visiting that cemetery where those young men are victims of Nazism also, even though they were fighting in the German uniform, drafted into service to carry out the hateful wishes of the Nazis. They were victims, just as surely as the victims in the concentration camps”

Reagan was criticized for this statement by opponents of the visit. Equating Nazi soldiers with Holocaust victims, responded Rabbi Alexander M. Schindler, president of the Union of American Hebrew Congregations, was “a callous offense for the Jewish people.” Some critics claimed that Communications Director Pat Buchanan wrote the statement, which he denies.Kohl confirmed an earlier press comment that in the last days of the war he was able to avoid service in the SS because he was only 15, “but they hanged a boy from a tree who was perhaps only two years older with a sign saying “traitor” because he had tried to run away rather than serve.”

Kohl made a call to the White House days before Reagan’s visit to make sure the President was not wavering in the face of criticism, not to mention pressure from wife, Nancy. The Chancellor’s aide, Horst Teltschik later said: “Once we knew about the SS dead at Bitburg – knowing that these SS people were seventeen to eighteen years of age, and knowing that some Germans were forced to become members of the SS, having no alternative – the question was, Should this be a reason to cancel?” Reagan aide Robert McFarlane later said: “Once Reagan learned that Kohl would really be badly damaged by a withdrawal, he said ‘We can’t do that; I owe him.’” Prior to sending Deaver back to West Germany for the third time, just two days before the scheduled visit, Reagan told his deputy chief of staff: “I know you and Nancy don’t want me to go through with this, but I don’t want you to change anything when you get over there, because history will prove I’m right. If we can’t reconcile after forty years, we are never going to be able to do it.”

When it came to Nazis, Nancy was Compassion Personified.

There was one announced change: an added visit to the Bergen-Belsen concentration camp.
The men buried in the Bitburg cemetery were part of Hitler’s Waffen-SS. At the Nuremberg Trials the Waffen-SS was declared a criminal organization with an exception only being made for those who were forced to join after 1943.
On Sunday 5 May, Reagan and Kohl appeared at the Bergen-Belsen concentration camp. The U.S. President’s speech there, according to Time, was a “skillful exercise in both the art of eulogy and political damage control.” Reagan said:

“All these children of God, under bleak and lifeless mounds, the plainness of which does not even hint at the unspeakable acts that created them. Here they lie, never to hope, never to pray, never to live, never to heal, never to laugh, never to cry…. And then, rising above all this cruelty, out of this tragic and nightmarish time, beyond the anguish, the pain and suffering, and for all time, we can and must pledge: never again.”

Reagan spent only eight minutes at the Kolmeshöhe Cemetery. Along with Kohl, 90-year-old General Matthew Ridgway, who had commanded the 82nd Airborne in World War II, and Luftwaffe ace and former head of NATO, General Johannes Steinhoff, Reagan placed a wreath at a wall of remembrance. After placing the wreath, and standing at attention in honour while a short trumpet salute sounded Steinhoff, in an unscripted act, turned and shook hands with Ridgway. Reagan smiled, and firmly shook General Steinhoff’s hand. Kohl later thanked Steinhoff for his actions.

And here’s that Third Reich Top Ten Favorite played there.