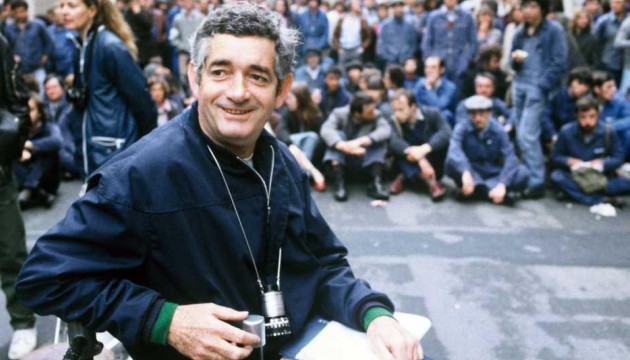 It’s quite remindful of his masterpiece Une Chambre en ville

Surely the “election” is very much in dispute

Thousands of people across the country marched, shut down highways, burned effigies and shouted angry slogans on Wednesday night to protest the election of Donald J. Trump as president.
The demonstrations, fueled by social media, continued into the early hours of Thursday. The crowds swelled as the night went on but remained mostly peaceful.

Protests were reported in cities as diverse as Dallas and Oakland and included marches in Boston; Chicago; Portland, Ore.; Seattle and Washington and at college campuses in California, Massachusetts and Pennsylvania.

In Oakland alone, the Police Department said, the crowd grew from about 3,000 people at 7 p.m. to 6,000 an hour later. The situation grew tense late Wednesday, with SFGate.com reporting that a group of protesters had started small fires in the street and broken windows. Police officers in riot gear were called in, and at least one officer was injured, according to other local news reports.

It was the second night of protests there, following unruly demonstrations that led to property damage and left at least one person injured shortly after Mr. Trump’s election was announced.

President-elect Donald Trump is an inevitable result f the sham called the Republican and Democratic parties. Bot work for the ruling corporate class, as does our “Free Press” So it should come as no surprise that “Billionaire Businessman” — specious and repulsive as he is — should step forth on his own and con a substantial portion of our ever-ignorant electorate into believing in him. This is NOT a Revolution. It’s an inevitable consequence of Capitalism.

The story is set during a workers’ strike in Nantes in 1955. Young shipyard worker François Guilbaud is one of the strikers, and he rents a room from Madame Langlois, a widow who sympathizes with the strikers although she is herself upper-class, born a baroness. His girlfriend Violette Pelletier, who works in a shop and lives with her mother, wants to get married but he is unwilling, partly because they have no money and nowhere to live.

In the street François is accosted by a beautiful woman wearing only a fur coat. This is Édith Leroyer, unhappily married to the owner of a television shop, who has taken to part-time prostitution. The two have a blissful night together in a cheap hotel and fall in love.
In the morning Violette comes looking for François because she has learned she is pregnant, but he tells her he loves another woman. Meanwhile, Édith, going back to her husband’s shop to collect some things and leave him, has a terrible row with him during which he cuts his throat. She flees back to her mother, who is François’ landlady. Next morning, François joins a demonstration which is broken up by the police and is fatally injured. His workmates carry him up to the flat of the baroness, where he dies in the arms of Édith. Unable to live without him, she shoots herself.

In short, we have much work to do.