Let’s Face(book) The Music and Fight Back ! Kevin Sessums claims it was “just political speech.” He spotted a posting by commentator Matthew Dowd, saying this:

“In the last few hours I have been called by lovely “christian” Trump fans: a jew, faggot, retard. To set record straight: divorced Catholic”

“Matthew Dowd who holds Trump and his followers to the standards of any other politician and hers. But as those who do hold Trump to the standards of any other person have found out on Twitter and other social media outlets these Trump followers are a nasty fascistic lot. Dowd is lucky he didn’t get death threats like Kurt Eichenwald. Or maybe he did and refuses to acknowledge them. If you voted for Trump and continue to support him and you think you are better than these bigoted virulent trolls, you’re not. Your silence enables them just as it did in the racist campaign that Trump and Bannon ran. In fact, hiding behind a civilized veneer in your support of fascism I consider more dangerous. We’re past describing you as collaborators at this point. That lets you off the hook. You’re Russo-American oligarchical theocratic fascists.”

At least one person on Facebook didn’t like those thoughts, to judge from the actions that followed the posting. In between binge-watching episodes of “The Americans,” Sessums checked his Facebook page and noticed something odd. Right “in the middle of the screen,” says Sessums, was a notification from Facebook saying that his Trump-supporters-fascist post had “violated community standards” at Facebook and declaring that Sessums was banned for 24 hours and, if the behavior continued, permanently. The “offending” post was taken down.

Those community standards are right out there in the open. They are common-sense regulations for a social-media platform, with strong prohibitions against things such as “direct threats,” “bullying and harassment” and “criminal activity,” among other unseemly activity. A look at the standards didn’t yield any provisions that would prevent a guy like Sessums from characterizing Trump supporters as he did. A Facebook search, indeed, unearthed a fair number of posts that sprinkle the term liberally in regard to the Trump movement

A number of Sessums’s supporters wrote posts on Facebook in response to the company’s action, some of them noting the morass of speech on the platform. For example:

“My friend and author, Kevin Sessums, has been banned from FB for 24 hours for using the word “fascist” to describe some of President-elect Donald Trump’s supporters. Keep in mind that Facebook refuses to ban other people for posting racist, anti-semitic, misogynistic, xenophobic or islamophobic comments as protected by the 1st Amendment … but Kevin is banned for using the word fascist — also a protected right. TELL ALL THE TIME WHAT U THINK! GO KEVIN! #IStandWithKevin.”

Pressure was exerted on Facebook: “Trumpsters will file complaints with FB to get us blocked,” wrote one Facebooker, “and FB won’t defend us unless we raise bloody hell. I’m asking my friends who work at Facebook to please investigate this stupid decision.”
In his chat with the Erik Wemple Blog, Sessums, a 60-year-old gay man who resides in San Francisco, was upfront about the resources at his disposal in fighting for his posting rights on Facebook. He is author of two books and had a glorious and highly productive stint as a contributing editor at Vanity Fair, among other postings. “They f—ed with the wrong faggot,” says Sessums, who wonders about the leverage of others in fighting Facebook’s standards enforcers. “That’s the bottom line.”

The real “Bottom Line” is that Facebook has elected to devote itself to soothing “hurt wittle feelings” of “Conservatives” (ie.Fascists) now that Donald Drumpf has bee Selected to the presidency.

Free to post on Facebook again (at least for the moment) Here’s what Kevin has to say about its latest REAL VICTIM:

I just heard from my friend David Drake that he has been banned for 24 hours from Facebook because of posting about my being banned from Facebook and using my quote about how FB “fucked with the wrong faggot” when it banned me for calling out Trump and his supporters as fascists – a quote that was online at the Washington Post which had no problem running it. David then linked to a news article about it all. I assume it was the Washington Post one where the quote appeared.

This is getting truly Orwellian and even though Orwell warned us about overusing the term “fascist” we are entering an era in America than can only be described with such a term. Now will the Orwellian darkness deepen and will I once more will be banned for quoting someone quoting me about my first being banned last night?

We will definitely do so, Kevin.

However “Orwellian” is what Roland Barthes would call “an exhausted signifier.” 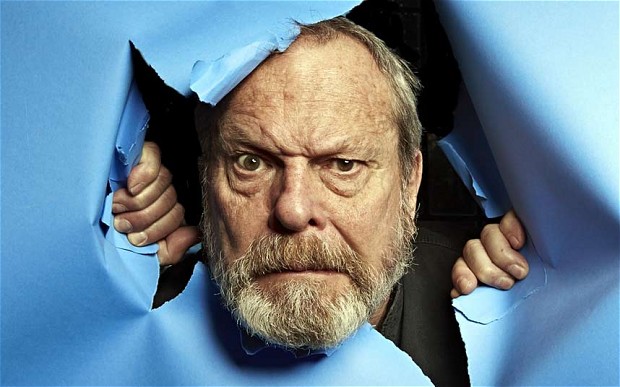