Towards the end of his life, Howard Hughes – the billionaire tycoon, aviator and filmmaker – had become a recluse. Locked in the penthouse suite at his Xanadu Princess Resort hotel in the Bahamas, he refused to bathe, cut his nails or hair, use a toilet or even open the curtains. Instead, he would sit for hours in his darkened bedroom, naked except for a pink hotel napkin, eating nothing but chocolate bars and chicken, surrounded by dozens of Kleenex boxes that he continuously stacked and re-arranged.
But another ritual obsession would come dominate his final few months in 1976: two movies, played continually via a projector on the wall, that he watched over and over again. The first was his favourite film, Ice Station Zebra – Rock Hudson’s tense 1968 spy thriller set in the Arctic. Aides would later recount that Hughes watched it over 150 times.

The second, however, was different – a movie Hughes himself had financed, produced and now grown to utterly detest. Hughes spent millions buying up every print on the planet, just to ensure no-one else saw it. And even now, when viewing the film every night before going to bed, he would order his personal projectionist to wear a blindfold, so only he would see the screen.
The film was The Conqueror – the dramatic tale of Temujin, a 12th-century Mongol warlord, and his rise to power to become Genghis Khan. Released in 1956, it was intended to be Hughes’ cinematic masterpiece – a sweeping, rousing, old-school Hollywood historical epic, packed with windswept action and swooning passion. It would be shot in breathtaking panoramic CinemaScope and glorious Technicolor. It would star two Oscar-winning lead actors at the very apex of their careers. It would cost over $6 million – the equivalent of $52 million today.
And by absolutely every conceivable metric – financially, critically, historically, ethnically, and even body count – it would come to be known as one of the biggest disasters in cinematic history.

Flawed from the outset, it would become known as one of the most grossly miscast films of all time, too – largely, it turned out, due to a wastepaper bin. The script had originally been written for Marlon Brando, but the rising star of 1954’s On the Waterfront had passed, wisely citing contractual obligations elsewhere. Which left a problem for the major studios: who had the acting chops to successfully portray Genghis Khan, one of history’s most feared warmongers
Step forward, to everyone’s surprise, John Wayne. At the peak of his career – he would make The Searchers the same year – the Duke was due to fulfill the last film of a three-picture deal for RKO Pictures, Howard Hughes’ megalithic film company. He was duly summoned to the office of the assigned director, Dick Powell to go over various potential scripts, when Powell was called away.
On his return, Powell found Wayne had pulled the screenplay for The Conqueror out of the bin – Powell had already rejected it for “sounding absurd” – and was now enthusiastically reading out lines. Despite Powell’s pleading, the Duke was not to be swayed: a 12th century Mongolian warlord was the part he was born to play. And as Powell later recalled, “Who am I to turn down John Wayne?”
Luckily for Powell, this casting decision presented only two problems: how John Wayne looked, and how he sounded. The first issue was solved with what was deemed perfectly politically-correct at the time – the age-old Hollywood tradition practice of simulating Asian “looks” by applying a thick coat of yellowface, shaving his eyebrows off, and then adding fake eyelids and rubber bands glued to the top of the head with spirit gum, to pull the corners of the eyes into a “slant”. Wayne was also told to grow a Fu Manchu style moustache. There you go: unmistakably Mongolian.

His performance, however, would prove more problematic – especially when confronted with the script. Writer Oscar Millard had wanted an “archaic” flourish to the dialogue, resulting in lines such as: “She is a woman. Much woman. Should her perfidy be less than that of other women.”
Such Shakespearean aspirations, however, were quickly annihilated by the Duke’s inimitable acting style. By the second scene, in fact, Wayne has given up on an Asian accent entirely, instead reverting to his famous cowboy swagger and halting drawl. And butchering such eloquent lines as: “Ya di’nt suckle me ta be slain by Tartars, my mo-ther.”

Maybe Warren Beatty should have made his Hughes movie about THIS. 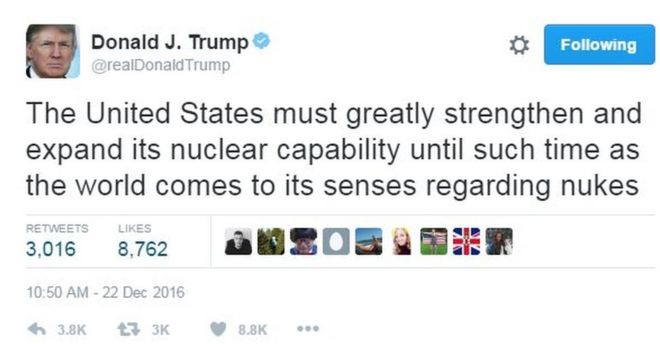 And now the “Clarification”

Hours later, Jason Miller, the communications manager for the Trump transition team, explained he “was referring to the threat of nuclear proliferation and the critical need to prevent it – particularly to and among terrorist organizations and unstable and rogue regimes”.
Mr Miller also added that the president-elect “emphasised the need to improve and modernize our deterrent capability as a vital way to pursue peace through strength”.
Mr Trump’s tweet came after President Putin met with his military advisers to review Russian military activities in 2016.

Take it away Vera!