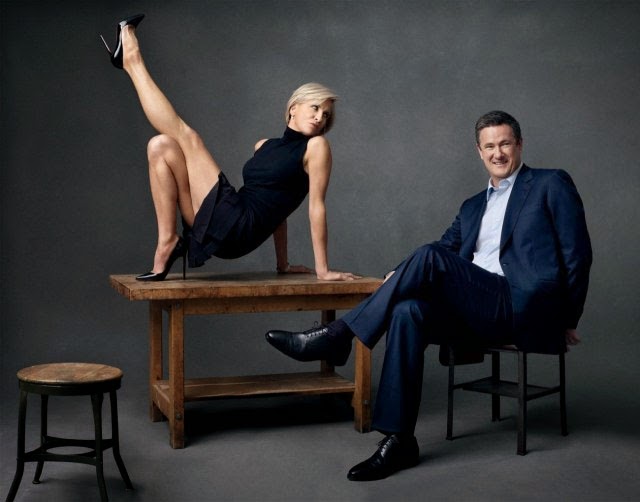 Joe Scarborough is furious with journalists covering President-elect Donald Trump for how they characterized the appearance of both the “Morning Joe” host and his MSNBC co-host, Mika Brzezinski, at Trump’s New Year’s Eve party at Mar-a-Lago in Palm Beach, Fla., on Saturday night.

On Sunday and Monday, Scarborough sent a flurry of tweets blasting several reporters, taking particular exception to the suggestion that he had “partied” with Trump. Scarborough insisted he was simply there trying to land an inauguration interview.

The brouhaha emerged after Maggie Haberman, a reporter for the New York Times, noted that Scarborough and Brzezinski were among the high-profile guests at Trump’s “Gatsby-like” soiree. Though Scarborough disputed the accuracy of the report, the Times story had simply and accurately noted his attendance at the event.

“I said, ‘Donald, here’s the deal,’ ” Scarborough recalled last week. “‘We were friends before the campaign, and when the parade stops and everybody turns on you like they do in politics, we’ll be your friends after the campaign.’”

It’s an acknowledgment of a coziness that drove Scarborough’s critics nuts throughout the 2016 campaign. Every news organization lavished attention on the unpredictable dark horse, of course, but to many, it seemed it was the special attention from “Morning Joe” — a relaxed if self-important clubhouse for the media-political elite — that lent legitimacy to the Trump phenomenon.

But now, his pipeline to The Donald poses an opportunity — or, perhaps, a kind of responsibility.
The president-elect may profess to be too busy for classified briefings, but if the real-time media criticism issuing forth from @realDonaldTrump is any indication, he has an unending hunger for cable-news punditry. “Who do you talk to for military advice?” NBC’s Chuck Todd asked him last year. “Well,” Trump said, “I watch the shows.”

One in particular seems a clear favorite. Scarborough insists this is nothing new for him, that the nation’s “influencers” have always watched his show. It’s a studied bit of nonchalance from a host who has never been known for his humility. But for once, it suddenly seems possible that Scarborough’s levels of ego and clout may be in alignment.

It’s an odd position, advising and reporting upon a president, sometimes on the very same topic. It’s engendered some bad feelings within NBC News, and it put targets on the backs of Scarborough and his longtime co-host Mika Brzezinski. Trump has referred to the duo as “supporters” and thanked them for helping make him “almost as a legendary figure.” CNN rival Chris Cuomo called them “boosters”; liberal MSNBC alumnus Keith Olbermann compared the host to Franz von Papen, the German chancellor who eased Hitler’s rise to power.

Scarborough views the criticism as “hypocritical,” he said. “Andrea Mitchell is friends with everyone in D.C. Chris Matthews is friends with people who have run for president of the United States.” No one seemed to mind, he said, that he had off-the-record conversations with President Obama or considers Obama’s campaign strategist David Axelrod a friend. Take It Away Boys!