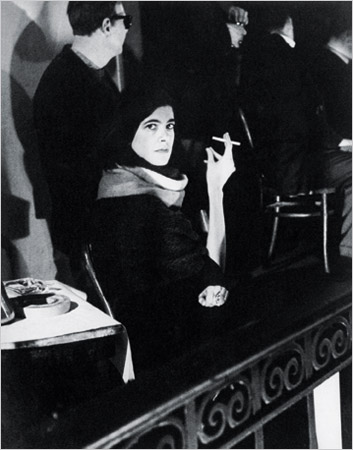 About a month ago I was put in “Facebook Jail” for a week, meaning I was not allowed to post for that select space of time. The reason given was my quoting something Susan Sontag had said back in 1966

The white race is the cancer of human history,

After she contracted cancer (she eventually died from it) Sontag took her quip back. But I’ve always loved it. Now however we lie in a time quite like that following 9/11 when we were all duly informed

“Watch What You Say”

Sontag — who I knew ever-so-slightly (I used to chat with her at Museum of Modern Art screenings, and she wrote an important essay on Godard for my friend Jimmy Stoller’s magazine “Moviegoer” later anthologized in her collection “Against Interpretation”) watched what she said all the time. She was an incredibly serious person — though she could also be quite funny. I wrote about her HERE
According to the NYT a new biography is coming out about her shortly which should give ammunition to her enemies, which is to be expected. Smart beautiful women are a real threat to culture, and few more so than she who was dubbed by “Esquire” magazine “The Natalie Wood of the avant-garde.”

A day doesn’t go by when I don’t wish she were still around to offer her insights, not to mention to meet Kate McKinnon whose wildly out-of-the-closet lesbianism might have loosened Susan up a tad. But these days wen the repellent Dave Chappelle is called a “genius” Sontag’s seriousness won’t be welcome. The only ones who should “Watch What You Say” these days are apparently the LGBT who when defending ourselves get a lecture on “Freedom of Speech” (a “right” now reserved for racists and phobes) Pointig out that straight men leave something to be desired got me a brief stint in “Facebook Jail” just now (I should e sprung by Friday). But as Eddie Muller says of “Noir Ally,” I like it in here.