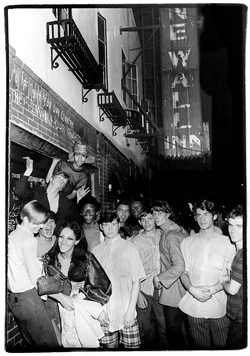 Today is the 51st anniversary of “Stonewall”. There are many myths about the place and the event. The “Stonewall Inn” (named after a Confederate General) was located in “Sheridan Square” (which was named after a Union General) As any place that openly catered to the LGBT was utterly Verboten the Mafia and the NYPD ran the show. The Gambino crime family owned the place and ran it and paid off the police.

When payments didn’t arrive on time or were felt to be insufficient, such dives were raided and their customers arrested. This is what happened that night — June 28, 1969. But the patrons (who as legend had it were in a very bad mood as Judy Garland had been buried that day) fought back. Here’s a rather good documentary.

It cover quite well the battle waged against the police that took place that night and continued for several nights afterwards. Great to see my friend from those days Tommy Lanigan-Schmidt >–a street kid who went there (he can be seen in the lower right hand corner of the photo posted at the top) who has gone on to become a fine artist.

“Stonewall” was about Police corruption — which makes it timelier than ever. The police are legal thugs. Period. They “Serve and Protest” a reactionary status quo that is in rapid retreat today the way the cops were at “Stonewall.”
Many deride the notion that Judy’s funeral had anything to do with “Stonewall.”

Back in the day Judy Garland concerts were the sole public space where the LGBT could congregate and socialize without fear of arrest. No I am not making this up. As the newspaper editor said in John Ford’s The Man Who Shot Liberty Valance “When the legend becomes fact, print the legend.”

In any event, a lesbian whose name has been lost to history threw the first brick. The cops were routed. For over a week afterwards we OWNED Sheridan Square. Street people began talking to one another and the Gay Rights Movement was born. Marsha P. Johnson and Sylvia Rivera (the latter can be seen in the official photo posted at the top which was taken a day later) weren’t there “opening night”.

I never went into the place. It was filthy and squalid. Glasses were never washed. It was popular with some people because there was a jukebox and a space for dancing — which was also illegal. The place is now a National Monument, and a legit bar. But because of the COVID crisis it’s teetering financially and there’s a move afoot to save it. Do so — and replace that statue with one of Judy Garland — who reminds us here that BLACK LIVES MATTER

“WE’LL SING EM ALL AND STAY ALL NIGHT !”