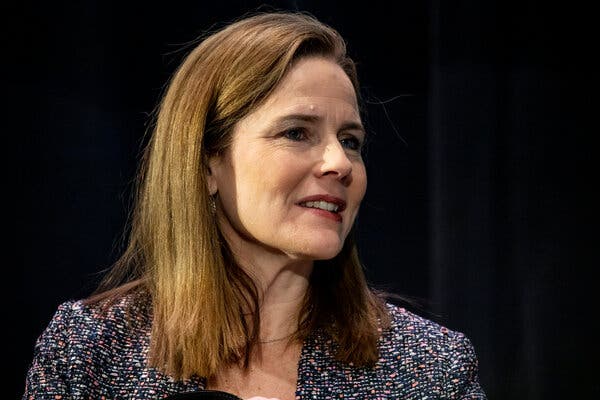 President Trump has selected Judge Amy Coney Barrett, the favorite candidate of conservatives, to succeed Justice Ruth Bader Ginsburg and will try to force Senate confirmation before Election Day in a move that would significantly alter the ideological makeup of the Supreme Court for years.

WE’RE ALL SO THRILLED!

Mr. Trump plans to announce on Saturday that she is his choice, according to six people close to the process who asked not to be identified disclosing the decision in advance.

WHICH DOUBTLESS PISSES HIM OFF

In picking Judge Barrett, a conservative and a hero to the anti-abortion movement, Mr. Trump could hardly have found a more polar opposite to Justice Ginsburg, a pioneering champion of women’s rights and leader of the liberal wing of the court. The appointment would shift the center of gravity on the bench considerably to the right, giving conservatives six of the nine seats and potentially insulating them even against defections by Chief Justice John G. Roberts Jr., who on a handful of occasions has sided with liberal justices.

Judge Barrett and her husband, Jesse Barrett, a former federal prosecutor, are reported to be members of a small and relatively obscure Christian group called the People of Praise. The group grew out of the Catholic charismatic renewal movement that began in the late 1960s and adopted Pentecostal practices like speaking in tongues, belief in prophecy and divine healing. The couple have seven children, all under 20, including two adopted from Haiti and a young son with Down syndrome.

In a 2006 speech to Notre Dame graduates, she spoke of the law as a higher calling. “If you can keep in mind that your fundamental purpose in life is not to be a lawyer, but to know, love and serve God, you truly will be a different kind of lawyer,” she said.
But during her 2017 confirmation hearing, she affirmed that she would keep her personal views separate from her duties as a judge. “If you’re asking whether I take my faith seriously and I’m a faithful Catholic, I am,” she told senators. “Although I would stress that my personal church affiliation or my religious belief would not bear in the discharge of my duties as a judge.” She was confirmed on a 55-to-43 vote, largely along party lines.

As an appellate judge, she joined an opinion arguing on behalf of an Indiana law banning abortions sought solely because of the sex or disability of a fetus, disagreeing with fellow judges who struck it down as unconstitutional.

MONTY PYTHIN WILL AING US OUT