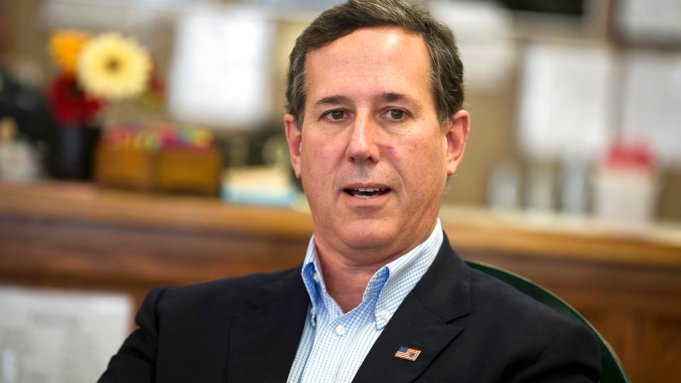 CNN has parted ways with Rick Santorum as a commentator, after a furor over comments he made about Native Americans and the founding of the United States.
CNN confirmed that Santorum is no longer a contributor. The HuffPost first reported the departure. A spokesperson for Santorum did not immediately return a request for comment.
At the Young America’s Foundation conference last month, Santorum said, “We birthed a nation. From nothing. There was nothing here. Yes, we have Native Americans, but there isn’t much Native American culture in American culture. It was born of the people who came here, pursuing religious liberty, to practice their faith, to live as they ought to live, and have the freedom to do so. Religious liberty.”
The video sparked a backlash, with criticism online and from some civil rights organizations and some groups calling for CNN to fire him. Santorum issued a statement saying, “I had no intention of minimizing or in any way devaluing Native American culture.”
Santorum joined CNN as a senior political commentator in January, 2017, as one of its voices from the right. He became a regular presence during the network’s coverage of the drama during President Donald Trump’s tenure, as well as during election night. He served two terms in the Senate, then went on to run for president in 2012 and 2016.
Several days after the Young America’s Foundation video surfaced, on Chris Cuomo’s show, Santorum tried to clarify the comment.s “Just to be clear,, what I was not saying is that Native American culture…I misspoke…what I was talking about is the founding of the country. I gave a long talk about the Constitution and the Declaration of Independence, and what I was saying is that we sort of created that anew, if you will. I was not trying to dismiss Native Americans. In fact, I mentioned them because they were here and they did have an impact. In fact, in this country you are right, they have a huge impact.”
He said that he was “talking about the founding and the principles embodied in the founding. I would never … the way we treated Native Americans was horrific. It goes against everything I have done and everything I have fought for as a leader in the Congress.”
But later that night, CNN’s Don Lemon said that he was “furious” by the interview. “No contrition. He didn’t talk about the suffering that Native Americans have had to deal with.”
“Did he actually think it was a good idea for him to come on television and try to whitewash the whitewash that he whitewashed? It was horrible and insulting and I apologize to the viewers who were insulted by this.”

Insult is no new thing with Rick

Tucker Carlson is sure to defend hm from the savage hoards out for his scalp.